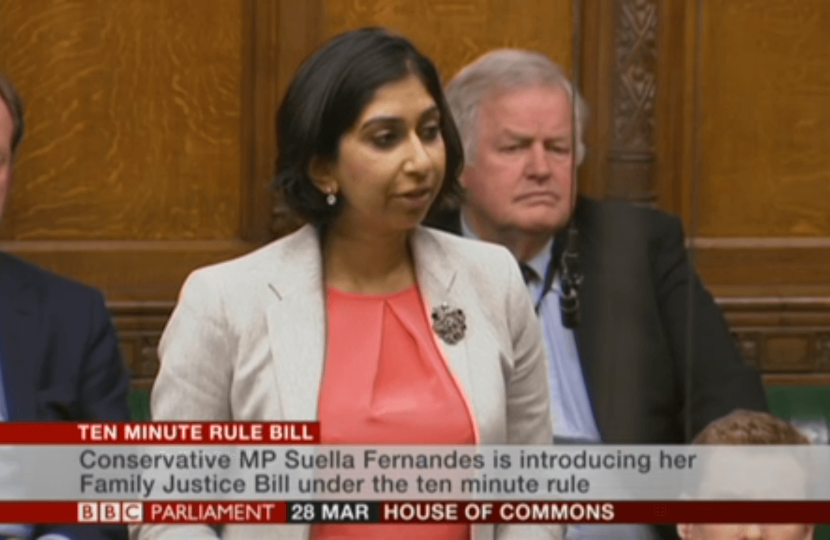 My campaign is an opportunity to set out the ways that we can continue the work of the Government in modernising the family justice system. I made a speech in Parliament back in March 2017, when I was introducing my Family Justice Bill, and I organised a debate on family justice reform in Parliament in November 2017. I have set out below the areas I am working to change:

We need to ensure that Child Arrangement Orders – which determine the contact and residence of children on divorce – are robustly enforced by the courts. Where a court is satisfied, beyond reasonable doubt, that a parent has failed to comply with their CAO, it has the power to enforce it in a number of ways. The current statutory scheme for enforcement orders sits alongside the court’s general contempt powers. Courts can; refer the parties to a separated parents information program; variation in the CAO, including a reconsideration of the contract arrangements; an enforcement order or suspended enforcement order; an order for compensation for financial loss; committal to prison; and issue a fine. In the majority of divorces, the orders are complied with. However, too often these orders are breached with impunity, usually by the resident parent, due to courts being reluctant to effectively castigate the non-compliant parent.

A new approach is needed. A tough 'three strikes' system where residence – if safe – should be transferred and Community Service actually- not theoretically- imposed upon those parents who fail to stick to the agreements is needed. Confiscation of driving licences or passports should seriously be considered by Parliament. The cost of making applications for enforcement action should be on the shoulders of the parent who is in breach of orders. If they do not like an order, they should take the responsibility to apply to vary it rather than remain in breach.

Proper enforcement of CAOs must also be coupled with a rebuttable presumption of shared parenting, which should be the core principle when determining the contact and residence of the children. This would not equate to an explicit statement of an equal 50:50 time division. As Professor Patrick Parkinson, a former president of the International Society of Family Law has made clear, this refers to a principle that a meaningful relationship with both parents is at the heart of the family justice system. Every child has a right to a proper relationship with both parents but, at present, the law does not make that clear.

There are best practice systems cases that the UK could learn from. For example, in Sweden shared parenting is treated as a legal norm and has managed, in the space of just 20 years, to transformed the landscape for shared parenting. More than 40% of separated parents share care on an equal basis while the majority of separated parents have shared care arrangements where each parent has at least 30% of parenting time. Part of Sweden’s success is that disputes are resolved through mediation, around 14 per cent, while just 2% were resolved through courts.

Legislation that emphasises the importance of both parents in childrens’ lives, other than in cases of violence or where the child is not safe, is commonplace around the world and operates without any difficulty. Good examples are Canada and the US States of Iowa, Florida, California and Colorado.

Many aspects of the current system reflect the values of a bygone era. A commission, to last no more than one year, should be launched by the Government to inquire into the following issues and to report back with recommendations for reform. First, we need to adopt no-fault divorce. The reality is that not all marriages end because of fault. We therefore have a law that promotes the farce of allocating blame, setting parties on a needless confrontational path that fuels animosity and costs.

We lag behind Scotland – which introduced no-fault divorce in 2006 – in terms of timely and fair solutions. If our closest neighbour geographically and jurisdictionally can do it, so can we. In Scotland there was a rise in divorce rates between 2006 and 2008, likely due to couples who had been left in divorce purgatory quickly divorcing, but this has been followed by reductions each year in the divorce rate since 2008.

The need to find fault simply adds to the emotional charge that is bound to be present in family breakdown in an already over-adversarial process. High-conflict family disputes tend to become intractable. We should be doing everything possible to avoid contributing to that conflict.

The enforceability of prenuptial agreements should be set out by Parliament. A prenuptial agreement is a formal agreement which sets out how assets will be divided in the event of a couple divorcing, which is agreed prior to getting married. These agreements are often sought when one partner has substantial wealth prior to entering the marriage, and who then seeks to protect that wealth should the marriage fail. But they are not legally binding and the final say on where assets are distributed falls on the divorce court. If we are to support marriage, we need to accept that people are getting married later in life, with assets earned before and during their union. They should be protected, if the parties agree, not put at risk, and a commission should look into this.

We must also consider reform of financial remedies and maintenance, which are rooted in a bygone era where women were entirely financially dependent on their husbands. The reality today is that many women are able to support themselves, so divorce should not mean an automatic entitlement to lifetime support from an ex-husband. Scotland and North America limit payments. A commission should make recommendations on how to strike a better balance so that England can shed its reputation as the divorce capital of the world.

Cohabiting couples with children are the fastest-growing type of family in the UK. Between 1996 and 2016, the number of couples in this position increased from 1.5 million to 3.3 million, yet they have no rights in the event of a split. An inquiry into what basic protections are justified would be valuable.

Opening up of the family courts

We urgently need to open up our family courts. Reform of the way in which the family courts operate in public law needs wholesale review. Far too many children are taken into care for wholly inadequate and poorly argued reasons, according to Sir James Munby, President of the Family Division. Only the glare of publicity will enable this to stop – so we need to remove the cloak of secrecy and open up our family courts.

Today I called for reform of the family justice system in a debate she organised in Parliament.

The debate was packed with members of the public watching from the public viewing galleries, with ques of people waiting for a space.

On June 8th, the country will have the chance to choose a Conservative government, with Theresa May’s steady hand at the helm. And as we embark on a new journey of self-government, forthright leadership is needed now more than ever.

In March 2017 I introduced a Bill calling for reform of the family justice system. My speech is below:

Fathers in the Family

My speech on fathers in the family, delivered in the House of Commons.

Thank you, Mrs Main, for your chairmanship of this debate. I thank the hon. Member for Airdrie and Shotts (Neil Gray) for calling the debate, in which I am pleased to take part.