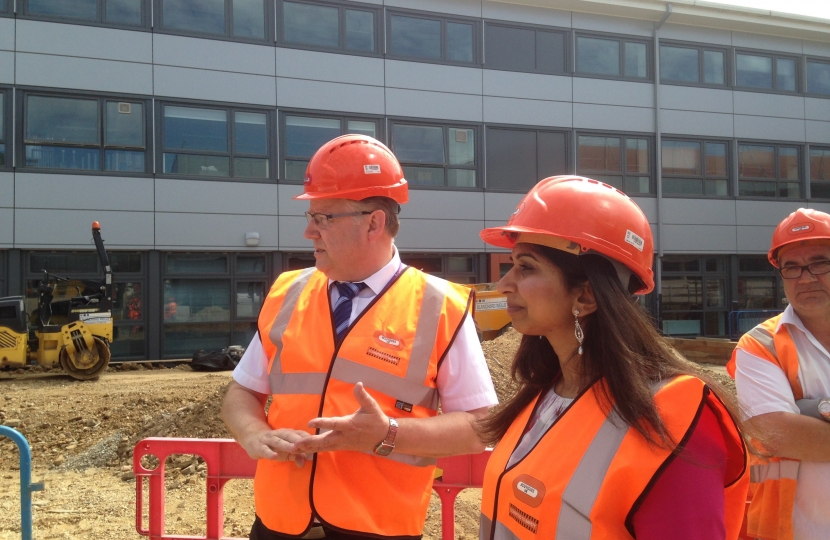 Improving local infrastructure and transport, along with local planning issues across Fareham, are important priorities for me. We need to keep investing in proper travel connections and the services to support people in their work and leisure time.

The future developments at Welborne and North Whitely have led to concerns regarding traffic on the M27. Many local people have complained of journey times from Fareham to Southampton of at least an hour, and up to two hours during busy periods – a journey that takes only 20 minutes without traffic. Many of these concerns centre on the Whitely Junction 9 exit, where daily traffic jams and queues extend from the slip road onto the motorway at rush hour times. This has been reported travelling both East and West on the motorway to Fareham and Hedge End respectively.

I know residents are also concerned about Junction 10, particularly in light of the new Welborne development. Many have expressed a need for works to the junction to update the infrastructure to ensure a minimal impact from the extra cars that will be using the junction after the development.

This situation impacts significantly on quality of life and economic productivity, and I believe it is vital that the M27 is updated to prevent the delays that have become an everyday occurrence for many commuters. I am continuing to lobby Transport ministers and the local authority to ensure this becomes a priority, and have welcomed the announcement of increased spending on road improvements by the Government.

Reliable train services are also vital for local people. Many constituents have raised with me their concerns about commuting times from Fareham to London. This relatively short distance of around 80 miles takes an hour and 40 minutes for fast trains, and nearly two hours for regular trains.

I know many people are also concerned about local buses. In many areas, the bus is essential to get people to work, education or health services, and the reliability of the services makes a big difference to people’s quality of life. I am campaigning to get First Buses, the local bus provider to offer more services in and around Fareham, especially in the Western Wards.

I have raised the issue of buses in Fareham in Parliament with the Transport Minister, and expressed concern that local authority funding for local bus services has been reduced by £1.5 million, leaving areas in the constituency such as Whiteley, Locks Heath and Warsash with virtually no bus service.

Older people in particular have raised concerns over the diminished service. Connections between Fareham and Gosport and Fareham for volunteering or work and the Queen Alexandra Hospital have been raised with me many times. Constituents have complained these services are often late or delayed. I have continued to raise issues such as these specific cases with the local authority and bus companies.

Ensuring that we provide adequate, affordable housing for a growing population is a national priority, and one which matters locally to people in Fareham too. But it is vital that new developments take place in the right places, and that they are properly supported by adequate local infrastructure. The planning process has to strike the right balance between providing the homes we need for the next generation, and ensuring that we preserve the character and beauty of our existing towns and villages.

I support the outline plans for new housing developments at Welborne and North Whiteley, but have raised with the local authorities the concerns of local people about their potential impact on infrastructure and local services. I will continue to champion the interests of local people, who want to ensure that these large developments take proper account of local feeling.

Welborne Garden Village will be a distinct new community with its own facilities, including schools and surgeries, rather than an extension to existing urban areas.  I believe Welborne to be a well thought-through development which adequately takes into account infrastructure provision.

I am the first to acknowledge that a new town is not an easy decision for the communities that border the site, such as Funtley, the north of Fareham, and Wickham, to accept.  When looking at the future housing needs of Fareham, Fareham Borough Council has needed to address a number of issues, including population trends, where to build houses and how to provide infrastructure to support the new homes.

Welborne will meet the borough's housing needs and without it, fewer people will get on the housing ladder, there will be significant upward pressure on house prices, and more families will be forced to live in accommodation that is too small for them.

Planning applications are not within the remit of the Member of Parliament but are instead determined by the Borough Council.  I have read the Planning Statement submitted by the developers and I do consider that there are serious concerns about this application.

Firstly, the site is, according to the current Local Plan (although Fareham Borough Council are in the process of drafting a new Plan) identified as 'beyond the defined Urban Settlement Boundary' and as such is considered as open countryside. This means that there is a presumption that the land should not be used for housing, unless there are material considerations for doing so. The Local Plan is an important guide in the planning process as it has been designed in consultation with residents thus given you a say in how and where housing might be allocated around Fareham. It is also telling that Fareham Borough Council has not identified the site for housing sites in the new Draft Local Plan which is currently in the process of being put together to help guide Fareham's housing in the future.

Secondly, the site would have difficulties of access because there is a lack of access from the Florins. It seems clear to me, on the basis of the available evidence, that not only is The Florins a narrow road providing limited space for passing vehicles but emergency vehicular access may well be very difficult.

Lastly it is clear that the land, currently used for grazing horses, is a vital lifesource for numerous wildlife such as slow worms, badgers, bats, deer and such development will surely harm the character and landscape of the area. This would explain why Fareham Borough Council did not allocate the site for housing in the first place.

I know that Fareham Borough Council are doing an excellent job in engaging with local residents over the current housing and planning challenges in our area whilst balancing the obligation to provide sites for 3000 additional homes. You are able to object to this particular planning application via the online link here.

Persimmon Homes have been successful in their appeal to build new homes on land north of Cranleigh Road west of Wicor Primary School, Portchester.  Planning permission has been granted for up to 120 new homes. But the Council has received over 500 objections to the development from local residents and groups. I wrote to the Director of Operations at Fareham Borough Council to expressed my strong concerns over the impact that new housing will have upon the infrastructure of Fareham, primarily, the Cranleigh Road area in Portchester. This development would have a detrimental impact on the roads, schools and services as well spoil the charm and character of Portchester. In a letter I asked whether Fareham Borough Council intended to challenge the decision. In addition, I also requested information on the steps that Fareham Borough Council is taking to meet the housing needs of the borough.

The Borough Council has put together a ‘Draft Local Plan’ which will determine planning applications and developments in Fareham until 2036. The Council is now finding more land to meet future housing demand as the Government requires it to build 8,000 new homes in Fareham by 2036. Welborne will deliver 6,000 new homes, but due to delays following land ownership issues, this will not be till after 2036.

Brownfield sites. In the Draft Local Plan, the Council aims to redevelop brownfield sites, such as Fareham Magistrates Court. FBC has also identified the Civic Quarter – near the Councils Civic Offices – which could be used to provide 100 homes. The Market Quay car park site would also be redeveloped to provide homes and complimenting retail and leisure services. This could provide around 100 new homes.

Greenfield sites. To protect the countryside, and character of the community, the Borough Council’s preferred approach is to protect the gaps between which exist between major settlements. Its long term strategy is to have fewer, larger developments that should bring additional community and will improve and add new infrastructure. The Draft Local Plan also seeks to build the local economy and provide jobs, goods and services to the community.

The Council expects developers to provide suitable recreational space alongside their housing proposals. This adds value to new developments and enriches communities.

Fareham MP Suella Braverman has welcomed a Government announcement that Fareham Borough Council has won funding to assist with a new housing development. The award of £300,000 is aimed at helping to with the designing and delivery of the proposed Welborne Garden Village.

69,000 first-time buyers have already benefited from the Government’s recent abolition to stamp duty land tax (SDLT) on properties under £300,000.

The Government announced today that it plans to support the Welborne Garden Village in Fareham by making available an extra £10 million in funding for infrastructure.

I have welcomed news that 96.6 per cent of premises in Fareham now benefit from superfast broadband.

This has been delivered as part of the Government’s drive to extend superfast broadband to 95 per cent of UK premises by the end of 2017.

The new, locally-led, garden village in Welborne will deliver 6,000 new homes for the local community, bring jobs, services and a boost to Fareham’s economy.

In a statement on rail infrastructure the Transport Secretary, Chris Grayling, said that the Government wants an integrated approach between train services and infrastructure and track works to reduce delays for commuters. He said:

Calling on the Chancellor to fund M27 and Stubbington Bypass

Congestion on our roads has been a problem for far too long. I met with the Prime Minister recently to highlight the problems facing commuters on the M27 and for funding of the Stubbington by pass.

We need more action on Junctions 9 and 10

Working to get more action from the Government and Highways England

keep me informed on these and the local issues