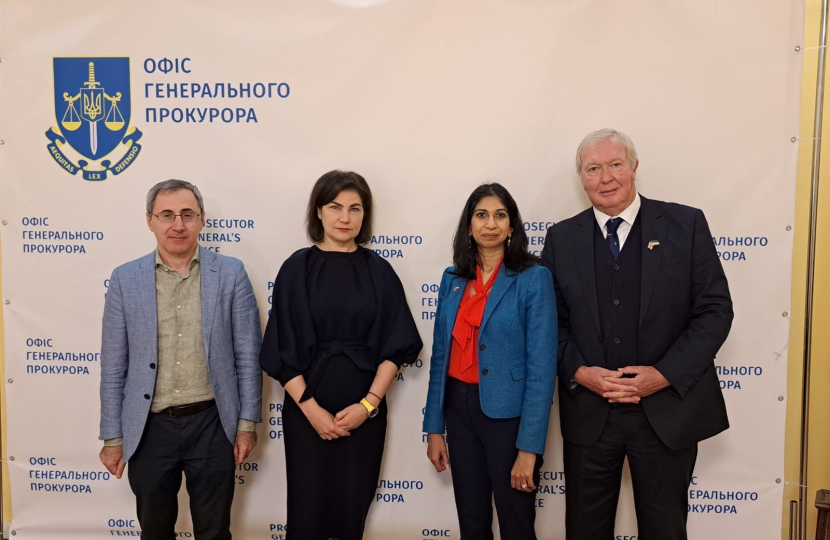 The Attorney General, Suella Braverman QC MP for Fareham, recently visited Ukraine and met with Ukrainian Prosecutor General, Iryna Venediktova. She also led a delegation of war crimes experts in Poland as part of the UK’s support for Ukraine’s investigations into Russian atrocities.

The delegation included Sir Howard Morrison QC, who the Attorney appointed as an independent adviser to the Ukrainian Prosecutor General’s Office in March. This follows the Foreign Secretary’s announcement (29 April) that the UK would deploy a team of war crimes experts to support Ukraine’s investigations.

As part of the visit, the Attorney met the Ukrainian Prosecutor General, Iryna Venediktova, to discuss what more the UK can do to support her work to bring war criminals to justice. At the meeting, the Attorney heard first-hand about Ukrainian evidence-gathering processes, their plans to prosecute individuals for war crimes in their national courts, and their collaboration with the International Criminal Court (ICC).

“Russia has brought barbarity to Ukraine and committed vile atrocities, including against women. I am pleased to have led the UK delegation of war crimes experts to Ukraine and to have met those leading Ukraine’s journey to justice, including the indefatigable Prosecutor General Iryna Venediktova. I am determined that British expertise will help Iryna and her team to uncover the truth and hold Putin’s regime to account for its actions. Justice will be done.”

“While courts around the world are working to hold Russia accountable, the bulk of the investigation – and the largest number of prosecutions – will be done by Ukraine itself. I am grateful for the UK’s help and to Attorney General Braverman for visiting Ukraine to show her personal support for bringing every perpetrator to justice.”