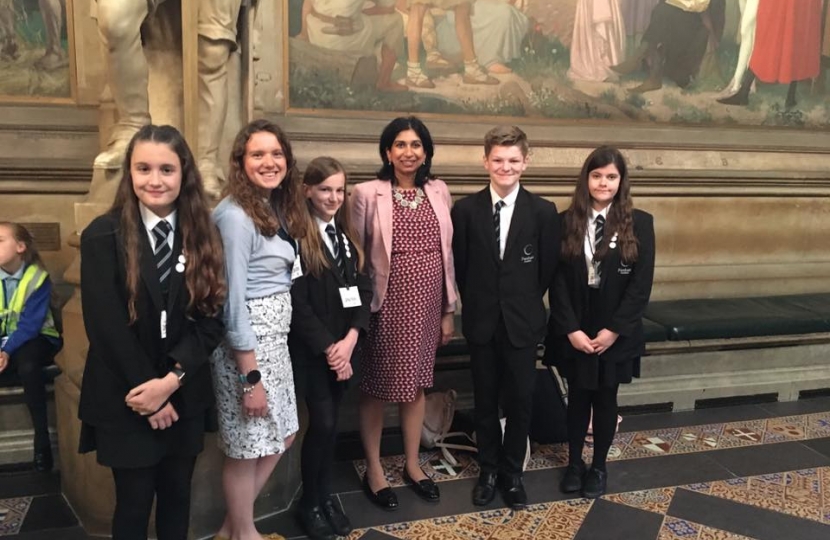 The winners of the Fareham School Debating Competition have visited the Houses of Parliament to watch the Prime Minister and MPs in action in the House of Commons.

Suella Braverman held her third annual Schools Debating Competition in March which saw a number of schools debating topical issues in front of a judging panel which included the editor of the Portsmouth News, Mark Waldron, Mayor of Fareham Susan Bayford and Deputy Principal of Fareham College Andrew Kaye.

Dylan Kelson and Isla Milnes took first prize for Fareham Academy, with Dylan also winning the Best Speaker prize. Their reward was a visit to Parliament and seats in the public gallery to watch Prime Minister’s Questions. Dylan and Isla were also accompanied by their teammates Hollie Rideout and Caitlin Rice and their English Teacher Ms Curtin-Sewell.

“I really enjoyed meeting the Fareham Academy debating team when they visited Parliament to watch Prime Minister’s Questions, which was their prize for winning my third annual Fareham Schools Debating Competition.

“The competition went very well and I was very impressed by the level of debate on show. I’m very much looking forward to holding the event again next year so we can encourage debate and young peoples’ interest in politics. Well done again to Dylan and Isla.”