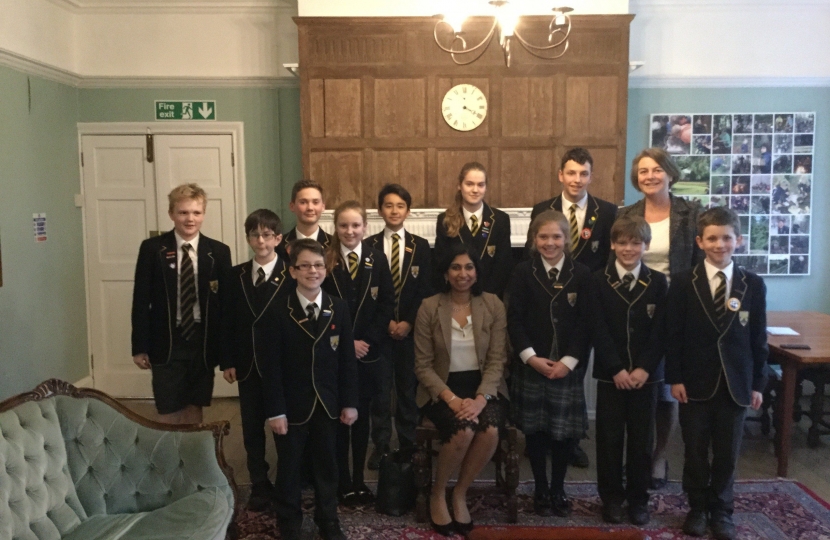 The Secretary of State for Education, Justine Greening, has today set out the Government’s final decisions on the National Funding Formula for schools and high needs.

The National Funding Formula aims to make the way schools are allocated funding fairer, with a system that determines the level of funding based on need.

The new formula will come into effect from April 2018, but the Department for Education has released figures that show how much funding would’ve been allocated under the formula had it been implemented in 2017/18. The figures show that every school in Fareham would see a percentage change in additional funding of between 0.8% and 13%. Fareham constituency as a whole would’ve seen a 6.2% increase in school funding under the formula for 2017/18.

I  organised a meeting between head teachers from Fareham schools and Schools Minister Nick Gibb, during which they discussed concerns for the impact on funding the new scheme would have.

Today’s news is great for the whole country and Fareham in particular. I organised a meeting with Fareham teachers and the Schools Minister earlier in the year, so I know there were anxieties about possible losses in funding.

But, doubts about any negative impact of the new scheme have been dispelled by today’s announcement, which shows Fareham schools would’ve gained additional funding under the new system, which means more funding per pupil at every school.

The Conservatives are delivering on our manifesto pledge to make school funding fairer. The new formula will replace the current out of date funding system that sees each area of the country receive very different amounts of money for no justifiable reason.

In a letter to me, Schools Minister Nick Gibb said:

‘This is an historic reform. It means, for the first time, the resources that the Government is investing in our schools will be distributed according to a formula based on the individual needs and characteristics of every school in the country.

‘The national funding formula will not only direct resources where they are most needed, helping to ensure that every child can get the high quality education that they deserve, wherever they live. It will also provide that money through a transparent formula, delivering greater predictability.

‘And, by clearly setting out the sums that we are directing to different components of the formula – to the basic amount per pupil, or to children with additional needs – for the first time it allows for properly informed debate on this vital topic: something the existing, opaque system has held back.’

Ms Greening’s announcement follows her previous statement on 17th July, when she set out that the Government is investing an additional £1.3 billion in schools and high needs over the next two years, on top of existing spending plans.

As a result, the core funding underpinning the national funding formulae will rise from almost £41 billion in 2017-18 to £42.4 billion in 2018-19 and £43.5 billion in 2019-20. Per pupil this means that funding will now be maintained in real terms for the remaining two years of the Spending Review period, as the transition is made to the National Funding Formula.

· And, provide up to 3% gains per pupil in 2018-19 and a further 3% in 2019-20 for under-funded schools. The minimum per-pupil funding level will not be subject to this gains cap, and so will deliver faster gains in respect of the very lowest funded schools.