Investing in our Royal Navy 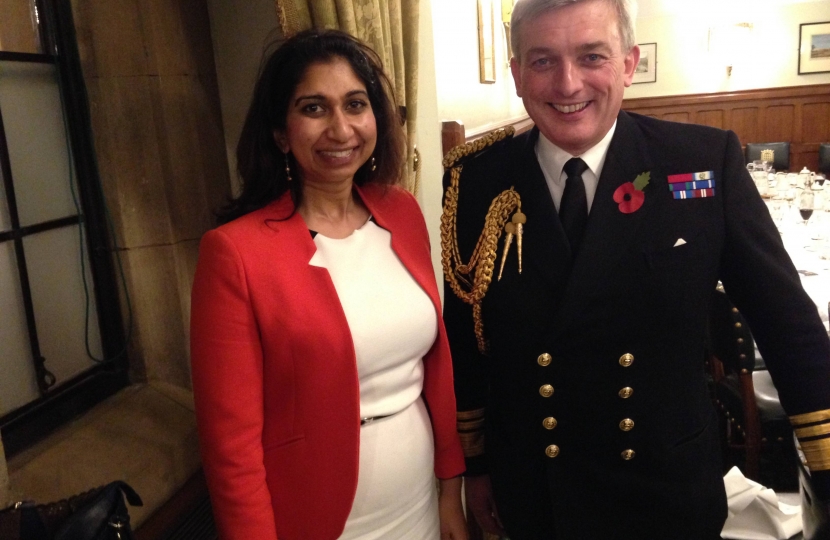 I was pleased to welcome today's announcement of extra investment in the Armed Forces and the Royal Navy, following his statement on the Strategic Defence and Security Review in Parliament.

The Prime Minister announced a £178 billion investment in defence equipment and support over the next decade when he unveiled the government's 5 year national SDSR. The £12 billion uplift in funding will be focussed on investments that will help to ensure the UK can respond to diverse threats in an increasingly dangerous and uncertain world.

Amongst the extra investmentannounced will be an additional sqaudron of F24 Lightening combat aircraft to operate from the new aircraft carriers currently under construction, as well as a new class of general purpose frigates and an increase of 400 in Royal Navy personnel, as part of a plan to increase the total size of the Royal Navy fleet by the 2030s

Prior to the SDSR announcement, I met senior Naval officers to discuss the future of the Royal Navy. I also recently visited HMS Collingwood in Gosport for a tour with its commanding officer, whilst at Westminster I met Vice Admiral Sir Philip Jones KCB, Fleet Commander and Deputy Chief of Naval Staff.

With such a strong local interest in the Royal Navy, I was keen to hear from senior officers their views on the future of the service, and the challenges it faces.  I was particularly struck by the Admiral’s account of the breadth of the duties being undertaken – from assisting with the refugee crisis in the Mediterranean to tackling piracy off the coast of Africa.  And of course, our Trident submarines continue to provide constant at-sea deterrence.

All our Armed Forces are admired and respected around the world, and rightly so. I believe firmly that the first duty of Government is to make sure its citizens are safe and that our interests are secure. As such, it is vital that we invest in strong defences.  That’s why I welcomed the Chancellor’s commitment in the Budget to spend at least 2% of our GDP on defence.

It is clear from the Prime Minister's statement that The Royal Navy remains a priority, supported by the resources it needs to meet the challenges of an uncertain world.  The excellent training they receive at facilities like HMS Collingwood is vital to helping prepare them for their increasingly varied duties.