Minus 10 Degrees with the Royal Marines in the Arctic Circle 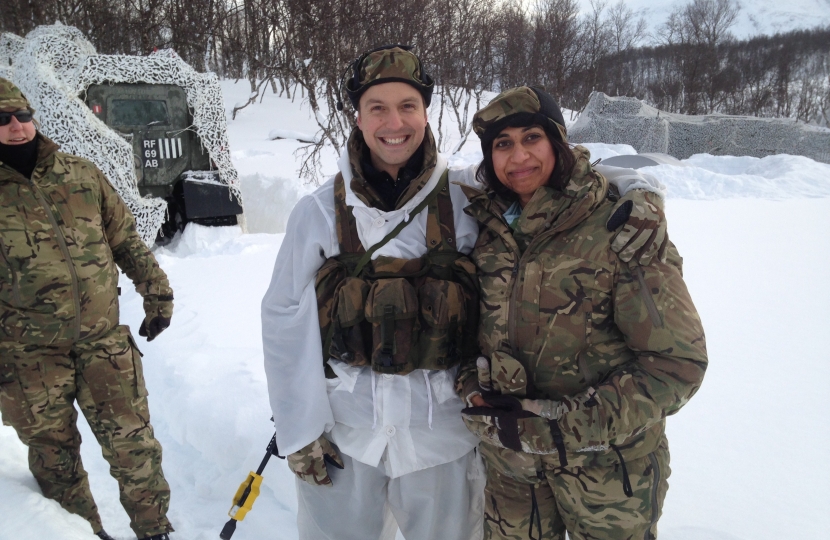 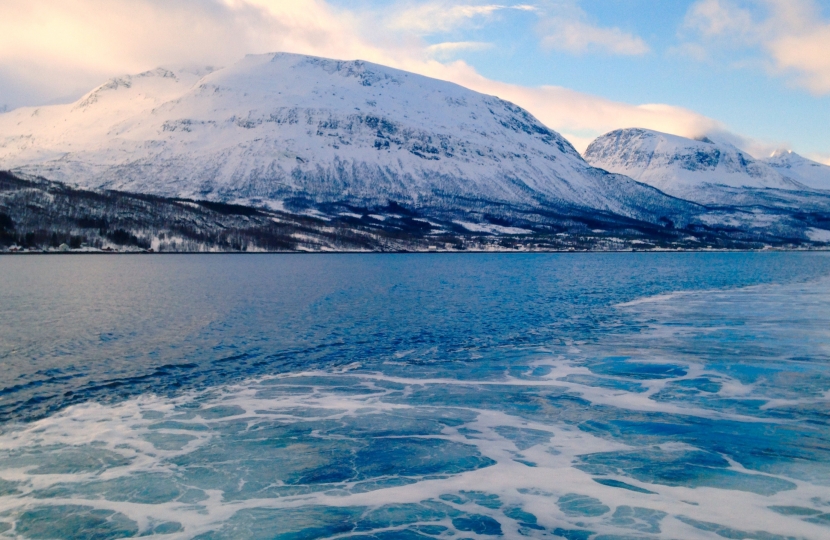 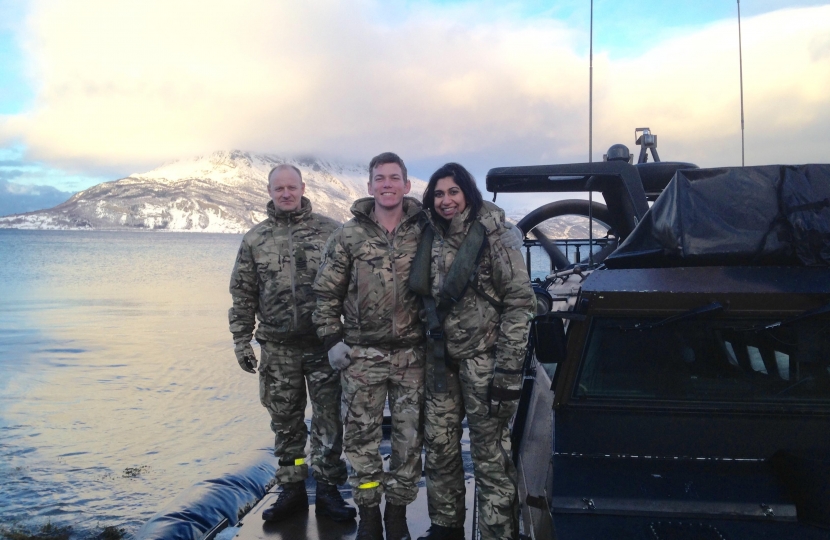 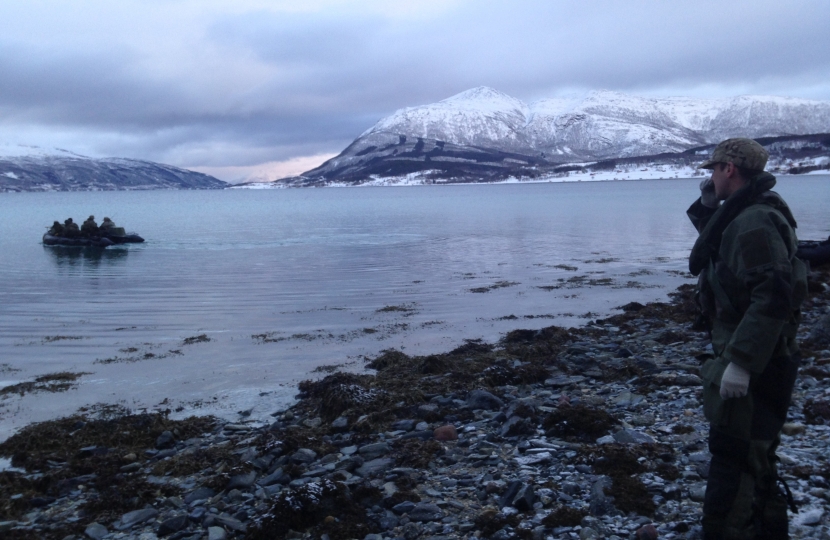 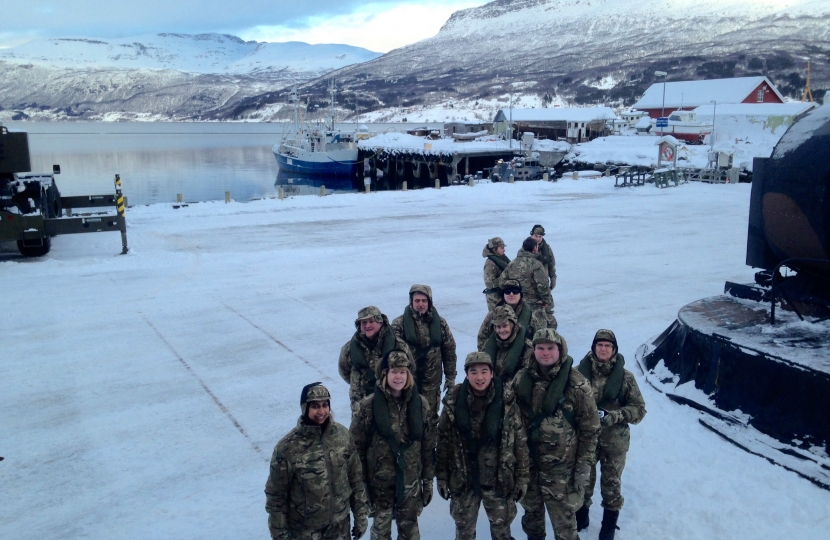 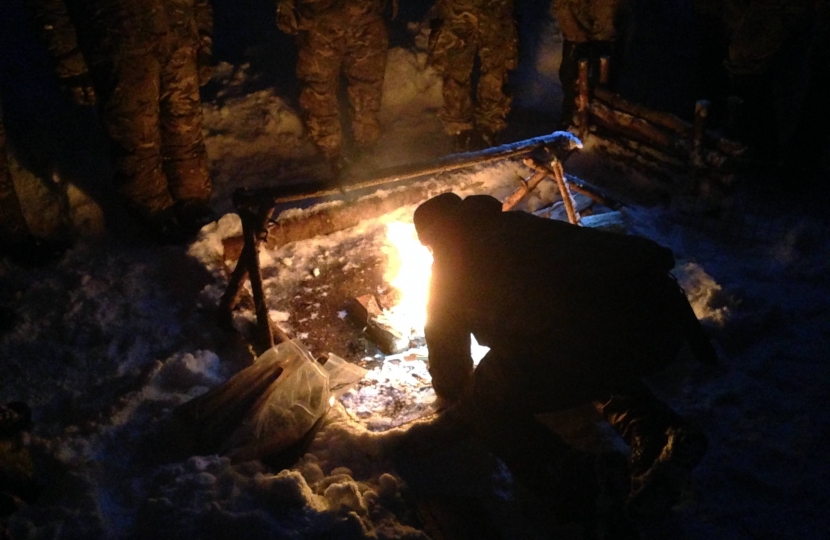 I visited 1 Assault Group Royal Marines and 45 Commando, known as some of the most elite commando forces in the world, on their cold-weather training in the Arctic Circle, as part of a Parliamentary delegation to Norway. The four-day trip was organised for members of the Armed Forces Parliamentary Scheme (http://www.af-ps.info/afps/) and took place during the February Parliamentary recess.

We owe a huge amount to the Royal Marines and the vital job they do on our behalf, so it was a privilege to join them in Norway and see the gruelling training they undergo in such difficult conditions. It was bitterly cold, and camping out in the Arctic is certainly not something I would recommend as a relaxing break, but I learned a huge amount from it. Representing a constituency with such established links to the Royal Navy, I see it as an important part of my job to gain a proper understanding of their work. This trip gave me the opportunity to talk to many serving marines and officers about the issues they face, many of which I can now raise with ministers.

Cold Weather Training is a Norwegian-led winter exercise. The main purpose of the annual winter exercise is to put Royal Marines and Royal Navy sailors and airmen through their paces in one of the most demanding environments. It is one of the most challenging and unpredictable environments in the world, snowbound for months at a time and full of life threatening hazards - but for the Royal Marines it is a home from home. Every year elements of the Royal Marines and Royal Navy leave the UK and move briefly to Norway's Arctic Circle where they undergo training in cold weather warfare. Participants will rehearse deploying and using military reaction forces in an area of crisis where they have to handle scenarios from high intensity warfare to terror threats and mass demonstrations. The skills and lessons learned in the mountains and fjords of Norway can then be applied to any environment in which the Royal Navy or Royal Marines may have to operate in the future. Thousands of personnel from various countries can participate in this training exercise including Canada, France, the Netherlands, Great Britain, Sweden, Latvia, Estonia, Switzerland, USA, Finland, Spain and Denmark. (from http://www.royalnavy.mod.uk/news-and-latest-activity/operations/arctic-…).

We flew from RAF Brize Norton to spend time with the Royal Marines on arctic warfare training in northern Norway at Asegarden Camp in the snow-covered fjords of Arctic Circle. We were based with 539 Assault Squadron Royal Marines, which is part of 1 Assault Group Royal Marines, meeting Warrant Officers, engineers and officers of 45 Commando as they prepared for NATO’s biggest war games. The adage of ‘if you can soldier here, you can soldier anywhere’ emphasised the importance of training to fight and win in harsh and unpredictable environments.

We camped out overnight with the marines in sub-zero temperatures, cooking our food over a fire and building a shelter from wood. There was a good team atmosphere but it highlighted the harshness of the environment. Skills learnt in this environment can be applied to any future theatre of operation. The Marines gave lessons on how to catch, cook and eat food in a survival situation, how to build a survival shelter and how to start a fire from scratch.

We got a broad overview of the advanced training that the Marines undergo, including:

* Learning how the Marines carry out reconnaissance and transfer personnel, vehicles, and equipment onto potentially hostile shores, using fast raiding craft and hovercraft around the port of Harstad (more than 150 miles inside the Arctic Circle). They use ORCs (Offshore Raiding Craft) which are fast and versatile crafts that can carry twelve Royal Marines Commandos and have a forward gun mount for a General Purpose Machine Gun (GPMG). The ORC can be transported and launched by trailer, under-slung from a helicopter and has tie down points for securing it to the deck of a ship or hold of an aircraft; as well as Landing Craft Air Cushioned (LCACs), ie hovercraft.

* They usually undergo 8 weeks of training with the boat crews learning how to survive and operate as marines in the harsh Arctic conditions at Åsegarden camp outside Harstad.

* The 539 men are taught basic survival skills by Royal Marines Mountain Leaders – the Corps’ specialists in cold-weather warfare – moving on to moving around using skis and snowshoes and finally fighting in the rugged, snow-laden terrain in temperatures as low as -30˚C.

* Once acclimatised, the marines move on to the business of amphibious operations; the squadron is expected to put Royal Marines ashore by landing or raiding craft whatever the climate. The ORCs can carry a dozen commandos and reach speeds over 30kts, while the hovercraft can carry 16 Royal Marines or two 1,000kg pallets of kit, gliding over water as fast as 35kts. Normally, such missions are carried out stealthily – but the squadron can also provide covering fire courtesy of heavily-armed ORCs Gatling guns and 40mm grenade launchers. And should anything go wrong ashore, the boat and hovercraft crews are expected to ferry casualties to a first-aid post or field hospital.

* Two weeks have been set aside to learn the art of operating the craft in the Arctic – from the challenges of navigation (one snowy fjord with a rocky shore looks very much like another) to driving the hovercraft over ice, conducting long-range patrols and dropping and picking up reconnaissance parties. “One of the toughest parts of operating in these conditions is the cold; you don’t really realise how cold it is until you get out here – and when you add the wind chill factory from travelling at 35 knots on the fjords, you really can feel it,” one Marine told me. Another added: “The snow and ice make things very challenging, very different from the conditions which were used to working in. It’s a completely different world from operating on beaches in the UK. “It’s surprising how cold it gets when the sun goes down – which is very early in the afternoon. That’s when we really have to look after our guys.”

* Once 539’s initial training package is completed, the squadron will embark six of its ORCs on the Dutch assault ship HMNLS Rotterdam which is heading to Norway for NATO’s Cold Response 2016. The exercise, which begins soon, will see 15,000 personnel from across the alliance practising the art of Arctic warfare by land, sea and air.

Upon my return, I put a question to the Minister for Defence Procurement, Philip Dunne MP, in the House of Commons. The Minister confirmed in his answer that one of the new Elizabeth Class aircraft carriers will be modified to ensure greater amphibious capability. The exchange was as follows:

Suella Fernandes (Fareham) (Con): I recently visited the Royal Marines on Arctic warfare training in northern Norway with my hon. Friends the Members for Plymouth, Sutton and Devonport (Oliver Colvile) and for Torbay (Kevin Foster) and the hon. Member for Stoke-on-Trent North (Ruth Smeeth). Will my hon. Friend join me in applauding 1 Assault Group Royal Marines and 45 Commando, which are known as some of the most elite commando forces in the world, and explain how the strategic defence and security review will support the Royal Marines?

Mr Dunne: My hon. Friend is very brave to have joined the Royal Marines in the Arctic. I pay tribute to her and her colleagues for doing so. The SDSR is committed to maintaining amphibious capability. We will be making modifications to one of the two Queen Elizabeth carriers to ensure that that persists for the life of that platform. (http://www.publications.parliament.uk/pa/cm201516/cmhansrd/cm160229/deb…)