Questioning the new Secretary of State for Education 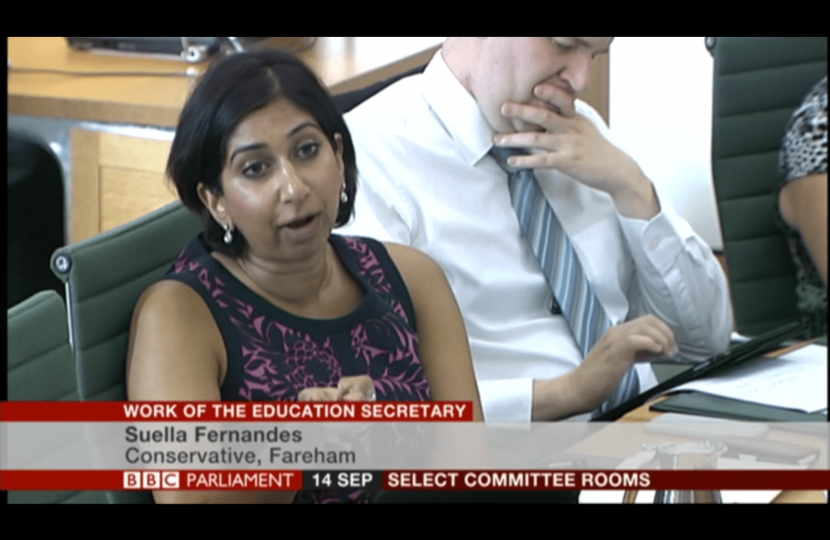 I was pleased to put questions to the Education Secretary at a select committee meeting today. The new Education Secretary, Rt Hon Justine Greening, faced her first grilling from MPs in a session focused on a wide range of issues across the Department for Education brief, including apprenticeships and skills, schools funding, the supply of teachers, mental health, social work reform and fostering, the future of Ofsted and school structures, such as academies and grammar schools.

I raised the issue of further education in Hampshire and asked, “the Government is currently undertaking major changes to apprenticeships and technical education … what stage are these changes at and how likely are they to be implemented?” Ms Greening replied:

“For a long time in our country we’ve focused on academic routes for our children and for those children who are academic they’ve been able to go far and been able to go fast, but for many young people who aren’t going to go to university, actually the vocational route has been a weaker one that’s had lots of different … qualifications that haven’t always been easy for young people to navigate a way through and they’ve also been disconnected from what employers want.

It’s about simplifying the system and being clearer cut on career pathways and technical education and then having employers more fundamentally owning our approach on skills more generally and apprenticeship so that we really can make sure … young people are going down a technical route that will deliver a career for them at the end”.

I then asked about the employer led approach, “what level of engagement or response have you had from employers?” The Education Secretary responded, “We’re setting up the Institute of Apprenticeships”, an independent, employer led, statutory body that will deliver high quality apprenticeships “and the CBI for example are very keen to be involved in that”, although Greening conceded that the Government has “a long way to go”.

Top of the agenda was the Government proposal to allow the creation of new grammar schools and the expansion of existing grammars. I asked: “The problem that this proposal is seeking to resolve is the selection by post-code that is currently prevailing in the system – what effect does that have on social mobility?” The Education Secretary replied:

“If you can afford to buy a house close to a good school, often a grammar school, then you get the advantage of that. But if you can’t, or you’re in a part of the country where you might like to have a grammar school but there just isn’t one there then you don’t. Of course, there are some parents who can afford to just simply … pay for their child to go privately and have them educated outside of the state sector but that is certainly not an option for most parents … and I think that we need to respond to that. Parents want choice – we shouldn’t simply turn around and tell them they’re wrong”.

I asked how the Government’s grammar schools proposal “will achieve the aim of increasing social mobility?” Ms Greening replied that by setting up primary “feeder schools” in areas where children are least likely to go to grammars and ensuring that a proportion of pupils must be from low income households it can “brake down those barriers” in a move that would “see grammars having more children from disadvantaged backgrounds to go to them”.