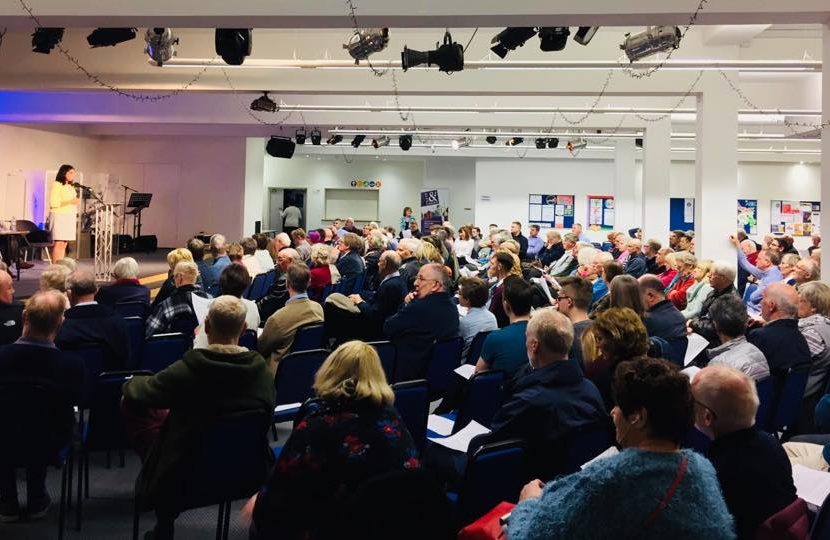 Fareham MP Suella Braverman took questions from more than 200 local residents at her second Brexit Q&A session held at Fareham Community Church. During the event, the MP answered questions about why she voted to leave the European Union, why she resigned from her role in the Brexit department and about preparations for no-deal.

In response, Mrs Braverman told attendees that she was not afraid of a no-deal Brexit and was confident that, despite some challenges, a WTO-Brexit would be the best option if the Prime Minister’s Deal was rejected. She said that the UK should be able to have the final say in law-making process, without allowing a court in Brussels to override decisions taken by UK courts.

This was the second free-to-attend Q&A session of its kind hosted by the MP this year, attracting twice as many attendees as her previous public meeting, held at the start of February.

“I have received hundreds of messages and letters from residents about Brexit over the last few weeks. People have many questions and are anxious about what is happening. I was pleased to update constituents in person and have now welcomed over 300 residents to these events.

“As the Brexit deadline approaches the people of Fareham deserve to have their comments or concerns taken on board and I will continue to work within Westminster and the constituency to ensure that they are. I would encourage any Fareham resident interested in the process to sign up to my monthly newsletter by visiting my website.”

Suella Braverman has welcomed the news that the Conservative Government has delivered on its manifesto pledge to enshrine the historic £33.9 billion funding boost for the NHS into law.