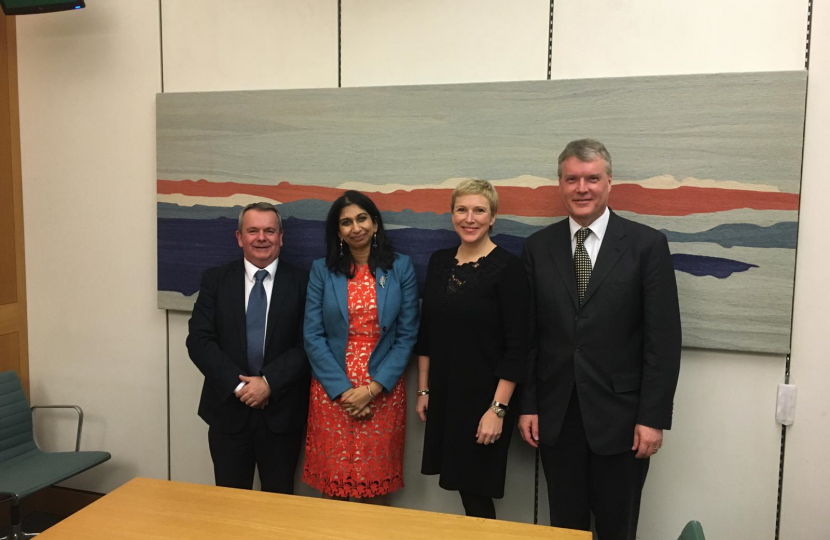 On Tuesday 3rd March the MP for Fareham Suella Braverman met with the Parliamentary Under Secretary of State for Transport Baroness Vere to discuss the upgrade of junction 10 on the M27. Also present at the meeting were Councillors Seán Woodward and Rob Humby. Seán Woodward is the Executive Leader of Fareham Borough Council and Rob Humby is the Executive Member for Economy, Transport and Environment at Hampshire County Council.

The meeting began with discussions concerning the strategic importance of junction 10 on the M27 as an important interchange between the conurbations of Southampton and Portsmouth. Following this the importance of upgrades were elucidated upon, whereby the significance of these improvements for the development of the sustainable garden village of Welborne was highlighted. The upgrade of junction 10 is a result of the collaboration of several partners namely; Fareham Borough Council, Hampshire County Council (the scheme promoter), the Solent LEP, Buckland Development and the Central Government. All parties have been working incredibly closely on the project and this meeting represents one of many consultations between the interests in the pursuit of an effective and workable junction 10.

The upgrades have become incredibly necessary if Welborne is to go ahead. The junction would provide quick and fluid access to the new 6,000 homes and is a vital component for the plans of development. All present at the meeting understood the exemplary project of Welborne cannot go ahead without the necessary improvements to the junction. Resultantly, the Minister was informed by Suella of the existent funding gaps present in the upgrade plans and all concerned at the table were able to identify potential sources of capital such as the Solent LEP which would provide a strong foundation for the upgrades.

Having identified these strategies going forward to break the deadlock and move on from the impasse, Suella was eager to mention the South East Rapid Transport System. Centred on a network of direct bus-priority routes, rapid transit aims to improve reliability and make it easier and quicker for people to travel in the area via public transport. Interchanging with local bus, train and waterborne services, rapid transit will transform the way Fareham constituents will travel in South East Hampshire. The Strategic Outline Business Case was submitted to the Department for Transport in November 2019, with the exact details of the scheme to be announced early in 2020.

Suella was keen to highlight to Baroness Vere that Rapid transit infrastructure and technology is designed to improve journey time and reliability. Furthermore, she drew attention to the fact that the proposed rapid transit network will eventually serve 14 large development sites which will together deliver 17,750 new homes and 306,000 sqm of employment floor space – comprising 42% of new dwellings and over 72% of new employment floor space in the Portsmouth city region to 2036. This will have an undoubtable benefit to the residents of Fareham who will also see their access to employment and education opportunities drastically improved and by increasing 0verall GVA.

Suella wholeheartedly welcomed the initiative in the meeting and is looking forward to continued cooperation with the Department of Transport on both the issues of junction 10 and South East Hampshire Rapid Transit.

‘Today’s meeting was incredibly fruitful. We have made invaluable progress on identifying funding strategies for junction 10 on the M27, whilst highlighting to the Department the necessity of the improvements for the prosperity of the Fareham district. Similarly, I was also pleased to be able to draw attention to the Rapid Transit bid which represents a huge leap forward in the connectivity of the South East Hampshire region.’