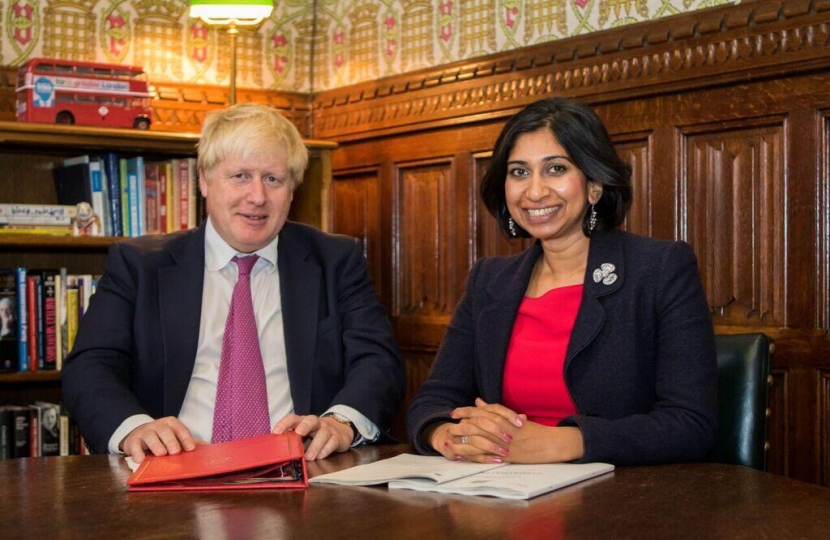 Fareham MP Suella Braverman has declared her support for Boris Johnson as next Conservative Party leader and Prime Minister during a vsit to Portsmouth on Thursday 27 June.

The former Mayor of London was visiting The Queens Hotel in Southsea to meet party members and business leaders from across Hampshire, as well as local councillors and MPs, on his way to the Isle of Wight for campaigning. The pro-Brexit MP spent aproximately 45 minutes at the hotel to answer questions and talk with local party members.

Upon his arrival Mr Johnson was welcomed to Portsmouth by Suella Braverman, who has given him her backing for party leader and Prime Minister. The Farerham MP says she wants the next leader to be someone who will deliver Brexit, deal or no deal, on the 31 October and finally deliver the result of the 2016 EU referendum.

“I am backing Boris Johnson as next Conservative leader and Prime Minister because I believe he has the credentials and belief in Brexit that will get it delivered by 31st October. Both Boris and I want a deal with the EU, but not one that could leave us tied into the EU for years to come or which threatens the integrity of the United Kingdom.

“The deal before us is not Brexit, and that is why we have both resigned from ministerial positions in the past year. Boris is committed to delivering Brexit and wants to embrace the opportunities that await us after leaving, including the repatriation of sovereignty, fully controlling our borders and conducting free trade with the EU and many other countries around the world.

“Boris also has a proven track record of reform and success whilst Mayor of London, and I believe he is the best person to keep Jeremy Corbyn out of government.”