Suella: Brexit impasse is risking trust in our politics 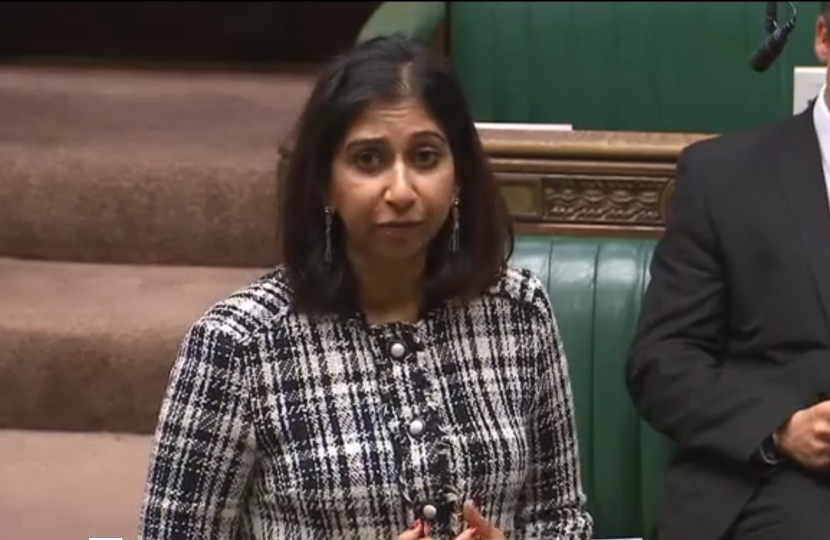 Trust. Such a simple word yet difficult to define. Can the British people trust their politicians? In fact, do we deserve their trust?

That question is being tested as we find ourselves in the middle of a constitutional crisis and political failure.

As a Leave-supporting MP, I resigned my ministerial job over the final terms of the Withdrawal Agreement in November. I then voted against it for the third time on Friday.

I have received a hero’s welcome from those grateful for “not letting us down”. I have also had the finger of blame pointed and have been branded an “extremist” and “hardliner”.

Champion and villain in equal measure. Neither, in reality, are true.

The position in which my Leave-supporting colleagues and I have found ourselves has been difficult.

As the valiant minority in a Remain-dominated Parliament, sidelined by the pro-Remain Government and Civil Service, we have always known that the uphill struggle was worth it for the sake of the 17.4 million majority. We resoundingly rejected the Withdrawal Agreement in January because it did not offer Brexit.

Parliament then passed the Brady amendment, which mandated the Government to replace the backstop with alternative arrangements.

Leave and Remain-supporting MPs spent weeks working together on the Malthouse Compromise. It was a solution to the impasse, but sadly not even tabled by the Government to the European Commission.

So colleagues have had to grapple with a catch 22: support the sham Brexit contained in the Withdrawal Agreement or face the prospect of an extension of Article 50.

I understand why many of my fellow Brexit campaigners chose to take the crumbs offered in the Withdrawal Agreement.

The fear of alternatives, a betrayal by Parliament and an establishment stitch-up are reasonable concerns.

The anger and shame at being presented with this Hobson’s choice is undeniable. I have nothing but respect and admiration for them.

For me, I cannot take the pseudo-Brexit. It was a bad deal in November and nothing has changed. How will I respond when the US abandon their offer of a free trade deal because we can’t set our own tariffs? What will I do when Northern Ireland becomes a distinct country to the rest of the United Kingdom?

This is why I cannot bring myself to vote for the Withdrawal Agreement.

The Prime Minister must now see that this deal is a dead one and instead elevate her leadership by staying true to her manifesto assurance that “no deal is better than a bad deal”. She must not let people down by accepting the customs union proposed by those who don’t want to leave.

The prodigious economic benefits of Brexit would be inexcusably squandered.

She can decide to support the anti-Brexit Parliament, risking the survival of the Conservative Party, or take the side of the British people who now just want to leave the EU on April 12.

Her choice is clear: shatter what little trust remains with the British people or prove that she, and the Conservative Party, are worthy of it.