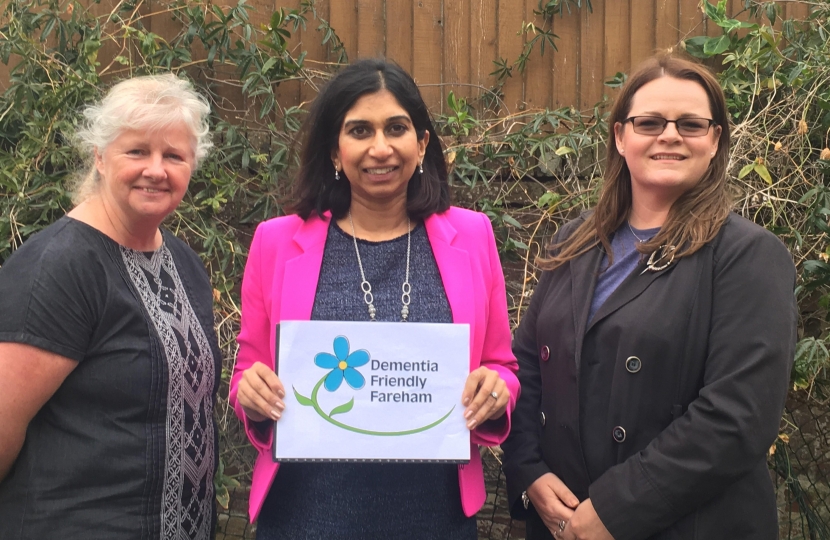 Member of Parliament for Fareham Suella Braverman has met with officials from Fareham and Gosport Dementia Action Group, where both parties called for greater awareness and support for people living with Dementia in Fareham.

The Fareham MP commended the work of the group, which campaigned for Fareham to hold Hampshire’s first ‘dementia friendly’ high street in 2013 as well as for two ‘Dementia Champions’ to be present in the Fareham shopping centre to assist visitors.

Fareham and Gosport Dementia Action Group is part of Dementia Friendly Hampshire which pushes for the development of dementia friendly spaces across the county. They are an independent charity linked with Alzheimer’s Society’s national Dementia Friendly Communities initiative. As part of their activities, the group trains qualified dementia ‘friends’ and ‘champions’ in an initiative aimed at raising awareness of the disease and educating people about how dementia sufferers navigate everyday life.

Suella Braverman MP, who became a ‘Dementia Friend’ when she was first elected, outlined the need to educate more young people about dementia as it becomes an increasing public health issue across the UK.  The Fareham MP has also recently called on the government to improve social care provisions, including making it easier for carers to access funding when caring for loved ones with Alzheimer’s disease.

“The work of groups like Fareham and Gosport Dementia Action Group is of huge importance to our community and I was delighted to become a ‘Dementia Friend’ when I was first elected which helped me gain an understanding of the challenges faced by those with Dementia.

“With an ageing population in Fareham, it is important that more people are aware of this disease and how it affects the lives of those suffering with it and their carers. I would certainly encourage people to join Dementia Friendly Hampshire and support their crucial work.

“The UK must remain a world leader when it comes to researching Dementia-related illnesses and I look forward to the forthcoming government report on changes to social care.”

Suella’s visit comes ahead of Dementia Action Week on Monday 20th May – a week that the Alzheimer’s Society hopes will encourage more people to take action and improve the lives of those living with dementia.