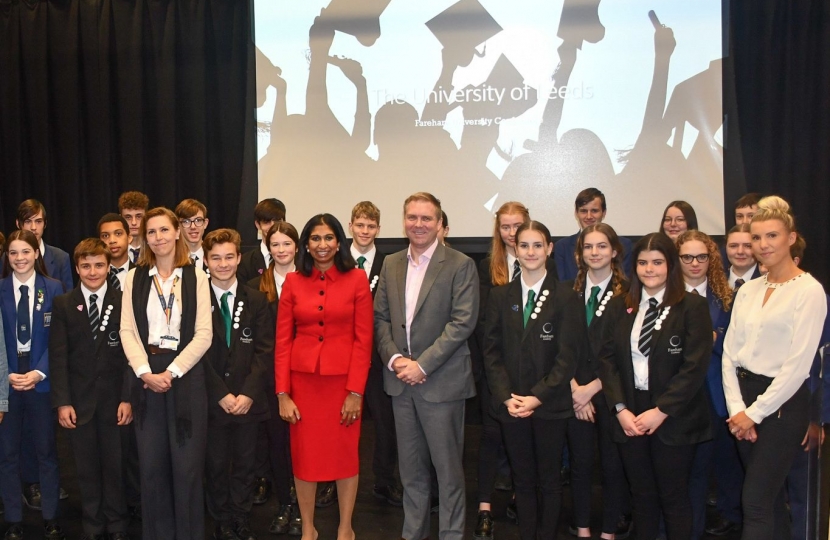 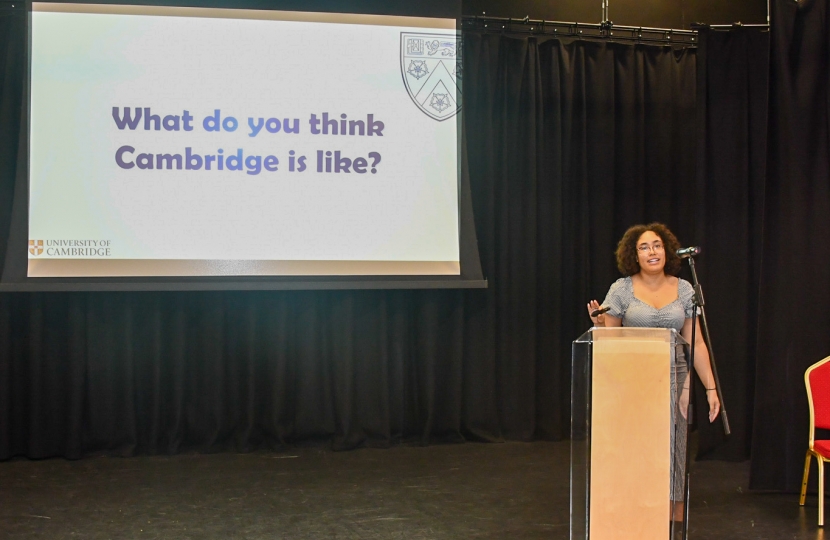 On the morning of Friday the 15th October, the local MP for Fareham Suella Braverman was delighted to convene the inaugural Fareham Universities Conference. The conference was held at Fareham College and year 11 students from Cams Hill School, Fareham Academy and Henry Court Community College, were welcomed by the Principal Andrew Kaye and Suella and given an agenda and informative pack, with key information on life at university, personal statements and A level choices.

The students were able to hear from representatives from the universities of Oxford, Cambridge, and Leeds. Stephanie Gordon the Education Outreach Officer at the University of Leeds began proceedings with a presentation entitled ‘Choosing A Levels, Choosing a University Subject, University Life and the Benefits of a University Education’. This was followed by a Q&A, where students from all three schools got to grips with life at university and asked pertinent questions regarding advice for choosing their upcoming A Levels.

Dr Sarah Norman from the University of Oxford followed with an insightful talk on access to Oxford, providing tailored and bespoke advice on crafting an outstanding personal statement and the Oxford University admissions process. Suella was delighted to learn that many of the students in attendance were considering both Oxford and Cambridge as their destination of choice following their A levels. Finally, Lizzie Bowles from the University of Cambridge, outlined the difference between ‘Oxbridge’ and other universities, helping the students to become acquainted with the collegiate system and dispelling some commonly held myths concerning the demographics of the two ancient universities.

Suella delivered an inspiring talk about her own personal journey to higher education, reminding the pupils that there is no university ‘type’. Suella explained that she was the first in her family to ever go to university and reassured the students that with hard work and determination, a bachelor’s degree would be well within their grasp. The conference was held as part of the local MP’s commitment to ensuring Fareham’s children get the best start possible and reflected Suella’s vision that every child, regardless of background, should have equality of opportunity when it comes to higher education.

“I grew up in Wembley and I went to school locally. Like many young people in Fareham now, I remember thinking that university was a far-away and alien concept, that had little relevance to sixteen-year-old me. My parents did not go to university and as a result I remember shutting out the idea entirely, thinking that the doors of the UK’s institutions would similarly be closed to me.

It was not until I started to learn more about higher education, that I began to realise that it was accessible to everyone with the right drive and determination.

That is why I want to champion events like the Fareham Universities Conference. To ensure that Fareham’s up and coming youngsters get the opportunities they deserve. It was an immense pleasure to speak alongside representatives from the universities of Oxford, Cambridge and Leeds and I want to extend a huge thank you to all who participated including Fareham College, Cams Hill School, Fareham Academy and Henry Court College.”

On Friday, the MP for Fareham joined specialists from Google to host a Google Digital Garage workshop. The event offered an opportunity for Fareham businesses to share expertise and insights, as well as learn about enhancing their digital marketing strategy from a variety of experts.