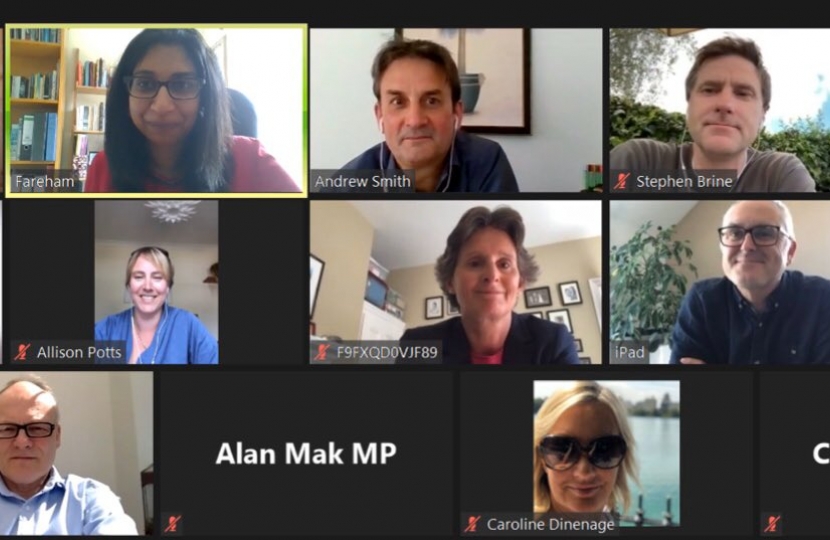 On Friday the 15th of May the MP for Fareham Suella Braverman headed a meeting which included several south coast MPs and representatives of Natural England. Discussed at the meeting were a number of strategies to break the nitrates deadlock around the Solent region. The existence of an abundance of nitrates in this area has been a barrier to housing and commerce for a number of months now and Suella has consistently been of the opinion that the matter requires resolving as quickly and effectively as possible.

There has been a great urgency to resolve the issue as local authorities are at risk of failing to comply with government targets for new housing in South Hampshire, as set out in the five year housing land supply and housing delivery test.  Similarly, smaller local developers less able to 'weather the storm', are beginning to experience difficulty retaining their staff because of the current lack of development opportunities across the region. Furthermore, with staff being released there will be a natural lag before people are back in post. Finally, desperately needed new housing is not being built which is proving detrimental to Solent-wide economic growth. For these set of reasons Suella has strived continuously to reach an agreement on the issue and to establish a pathway of resolution with Natural England.

Having listened carefully to the concerns of many troubled Fareham residents, Suella has held the issue at the top of her agenda for a number of months now. In the past few months she has met with the Secretary of State for Housing Robert Jenrick, to discuss the issues in a meeting, where also present were Cllr Sean Woodward, leader of Fareham Borough Council, CCllr Keith Mans leader of Hampshire CC, the Solent LEP and Buckland Development. She has also written to Natural England twice and passionately raised the matter in the chamber. However, perhaps more significantly most recently Suella headed the south coast summit with Natural England to interrogate further some of the plans for mitigation that have been suggested from a range of different sources such as the Wildlife Trust.

At the meeting the viability of the Wildlife Trust Scheme was analysed and discussed in detail. Under the Wildlife Trust Scheme the LPA or developer would calculate the nitrate offset requirement for their development(s) (or potentially their agreed Local Plan) with the calculation validated by Natural England. The Trust would then sell nitrate credits at an agreed rate to local authorities or developers. A credit being 1kg/N per year. (est. £2000 - £2500 per credit plus an admin fee of circa £1000).  The Trust would then purchase intensively managed arable land which it would remove from intensive production in perpetuity. Following this the Wildlife Trust would then enter into a legally binding contract to underpin the agreement. Finally, once secured the Trust would look to re-wild areas, create wildflower meadows or plant woodland to bring significant additional wildlife benefits to the areas concerned.

Suella is happy to announce that the Trust has started the process of acquiring a site on the Isle of Wight, approved by Natural England as providing 1,075kg of nitrogen offset.    An additional ten sites have also been formally or informally offered to the Trust and if these are all approved by Natural England then a further 12,000kg of nitrogen could be offset.  Eight of these sites are on the Isle of Wight. Should all of these sites be acquired this could offset nitrates equating to circa 4,000 homes. This would spell a sustainable and viable solution for the nitrates deadlock.

Significant progress has been made and the roundtable was immensely productive, with all participants able to input in a constructive and strategic manner. Suella is looking forward to hearing from Natural England in the coming weeks and is excited that the process of resolution has begun so successfully. She was particularly pleased to note the level of cooperation between the cross-party south coast collective and commented that it was deeply encouraging to see so many parliamentary colleagues deeply concerned with the welfare of the Solent region. All of this spells a promising cooperative relationship with Natural England going forward.