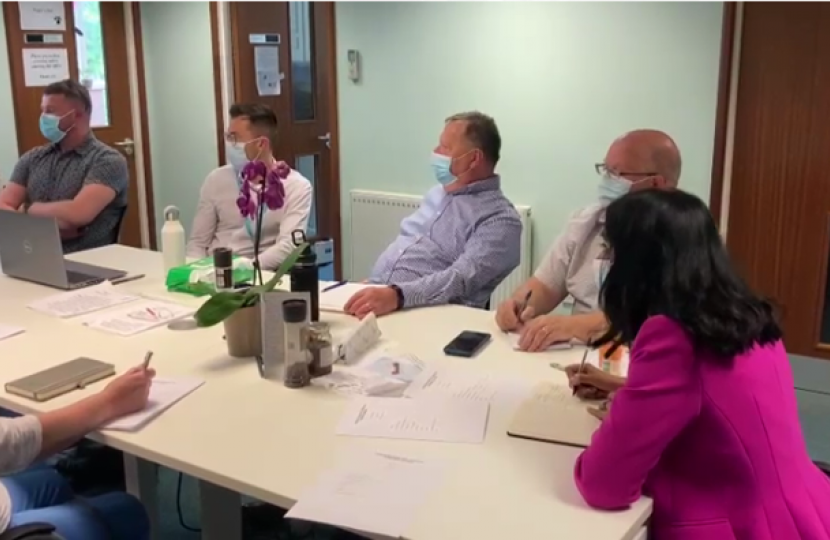 Over the last few weeks Suella has been ardently focused on improving services at local GP surgeries across Fareham. After hosting her Fareham Health Summit on 25th March 2022, Suella was adamant that action must be taken. The summit provided Fareham residents with an excellent opportunity to raise their grievances with representatives from local healthcare providers. The event also led Suella to the stark conclusion that Fareham residents are not receiving the first-class healthcare that they deserve. On the back of this event Suella also received a number of complaints similar to those raised at the summit – further prompting her swift response.

Complaints from Fareham patients highlighted three key issues: the failure of the eConsult and triage system, lengthy waiting times, and poor accessibility of GPs. Knowing the impact this has had, Suella was clear that things must change to ensure that these problems are rectified.

In a letter to Dr Tom Bertram, Clinical Director and GP Partner, Sovereign Health Partnership, Suella conveyed the frustrations felt across Fareham and requested urgent action. Due to the imperative and time-sensitive need for a solution, Suella requested Dr Bertram provide a plan to dramatically improve access to GP appointments, create a clear channel for complaints, and issue a workable timeframe to achieve these improvements.

On 26th April, Suella was pleased to receive Dr Bertram’s prompt and detailed response. Dr Bertram’s letter acknowledged the three key issues facing the Sovereign Health Network’s surgeries and outlined informative explanations in each instance. On the eConsult system, it was agreed that there does exist considerable limitations. Since its introduction in 2016, the eConsult has produced many pros and cons. Due to the level of detail it provides, GP’s can make better and more informed decisions. However, the eConsult has made communications increasingly complex for surgeries and at times the system is not always user-friendly. In acknowledgement of this, Dr Bertram said, “We are now undertaking an audit of our systems following the feedback, which was raised at your health summit, and will engage with our patients around any improvements we propose to make to the system.”

Dr Bertram explained that lengthy waiting times were a result of the sharp rise in demand for GP appointments. Since January, the Sovereign Health Network has provided an average of 11,000 appointments per month. In March, 1,988 more patients were added to the network – further increasing local health pressures. Despite this, Dr Bertram has continued to provide face-to-face appointments and has accelerated plans to reduce pressure. Recently, they partnered with a pilot organisation to allow the provision of 58 video GP appointments per week and have employed several locum GPs for extra capacity. Over the last four months telephone waiting times have reduced by 31% on average. Additionally, a new telephone hub was introduced on 4th April which has seen Sovereign helping the largest number of patients via telephone than ever before.

Despite Sovereign’s passionate and dedicated service, Dr Bertram was clear that the sharp increase in demand has led to unavoidable pressures. This was emphasised by pointing out that the number of patient requests from the penultimate week of April increased by 38% compared to the number of requests from the penultimate week of April last year. To improve their service, work has been undertaken to increase staffing levels in key areas, a new patient services manager has been appointed, the musculoskeletal service has been extended, and additional locum GPs have been introduced. Dr Bertram also reinforced his confidence in Sovereign’s complaints process; with four accessible ways to complain, patient complaints are welcomed and thoroughly investigated.

Suella was deeply encouraged by Dr Bertram’s detailed response and promising improvement plans. From this letter, Suella took confidence in his understanding of the situation and welcomed that plans have been established to provide Sovereign with further feedback via an in-person patient engagement event. To take part in this, Sovereign patients are encouraged to attend a patient drop-in event which will run from 11am until 6pm on Tuesday 24th May 2022 at Holiday Inn, 2-8 Cartwright Drive, Titchfield, Fareham, PO15 5RJ.

In a similar letter sent to Sara Tiller, Managing Director of HIOW CCG, Suella was comparably pleased with her response too. Much like the Sovereign Health Network, the CCG is aware of their challenges and has acted upon these. In Sara’s response she outlined a number of the CCG’s surgeries’ recent improvements to date. These included:

On the back of this action taken by Suella to champion local healthcare, improvement has started to be seen at Fareham GP surgeries. Whilst in the process of passing on individual constituent complaints to relevant surgeries, Suella has been contacted on a number of occasions by constituents wanting to rescind their complaints. This has been prompted by some constituents saying that they no longer wish to complain as they have seen evident improvements. This was exemplified by one resident saying, “I am pleased to advise that I am now receiving better service from Sovereign, and I do not feel the need to raise a formal complaint … I am grateful to her for the actions she has taken to date which will I am sure lead to an overall improvement in the surgery’s performance.”

In similar fashion, Dr Bertram has been keeping a sharp eye on the issues of his patients and is listening and acting. To show this Sovereign have produced a document titled ‘You Said, We Did’. Within this Dr Bertram outlines the specific issues and the corresponding action taken. For a copy of this, please see the attached document below.

“Since becoming the MP for Fareham in 2015 I have always fought hard to improve our local healthcare services. After hearing the commonly felt frustrations first-hand during my Health Summit last month, it became quite clear to me that something needed to be done.

“I am grateful to Dr Bertram and Sara Tiller for their exceedingly detailed letters and am pleased to see that improvements are being made. By recently hiring more staff in key areas and focusing on improving their telecommunications, more patients are being seen. I am also glad that Sovereign are proactively seeking feedback from their patients and would encourage people to attend their next patient engagement event at the end of May. I’m looking forward to maintaining regular contact with the CCG and Sovereign Health Network, as well as my constituents, to ensure that I continue fighting for the first-class local healthcare that all Fareham residents deserve.

“I’d also like to thank all the surgeries and GPs that I’ve been in contact with recently. They’ve been under an enormous amount of pressure since the start of the pandemic, they’ve been inundated with a variety of challenges, and I know at times it must be hard to hear complaints from patients. However, I’ve been undoubtedly impressed with their response. The men and women at are GP surgeries have been working tirelessly to provide us with the vital services they offer and I’m grateful to them for their continued perseverance to improve services across Fareham.”