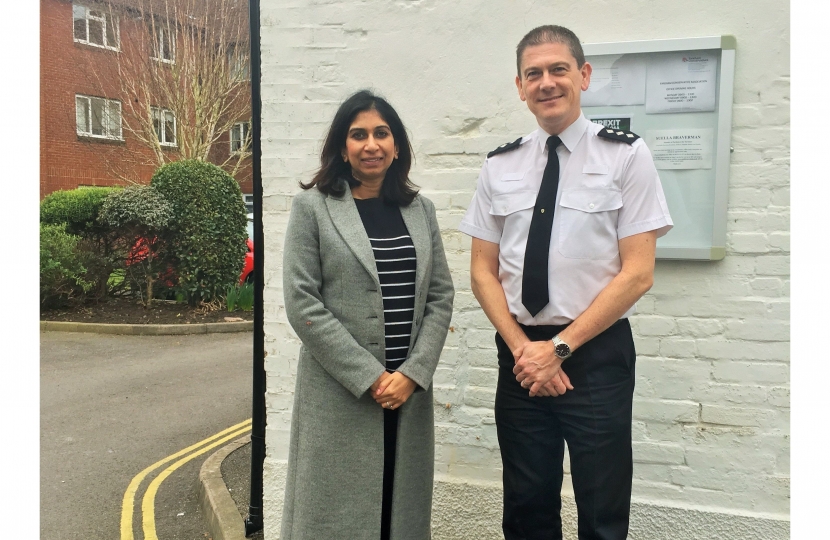 Chief Inspector Lewis updated Suella on Hampshire Constabulary’s plans to combat criminal activity in Fareham and affirmed his commitment to work in partnership with the local MP to address residents’ concerns about drug use, increasing anti-social behaviour and violent crime. He also updated the MP on Hampshire Constabulary’s plans to recruit over 200 more police officers over the coming year to deal with local crimes.

The meeting also comes after Suella recently supported a local petition to install CCTV surveillance at The Gillies following a string of offences, including an armed robbery and a stabbing.

“I was encouraged by my meeting with Chief Inspector Lewis who explained his plans to address growing concerns about local crime. Through maintaining strong links and working closely together, I will do all I can to support Mark in keeping the residents of Fareham safe.

“The additional police officers being recruited by Hampshire Constabulary this year will be a welcome benefit to Fareham, as it will allow more time to investigate local issues and tackle violent crime, domestic violence and cyber-crime.”

A New Deal For Britain

Yesterday Boris outlined a “New Deal” for Britain which delivers jobs, skills and infrastructure for our country in this unprecedented time.