Suella Meets with Secretary of State for Housing, Communities and Local Government to Discuss Nitrates Around the Solent. 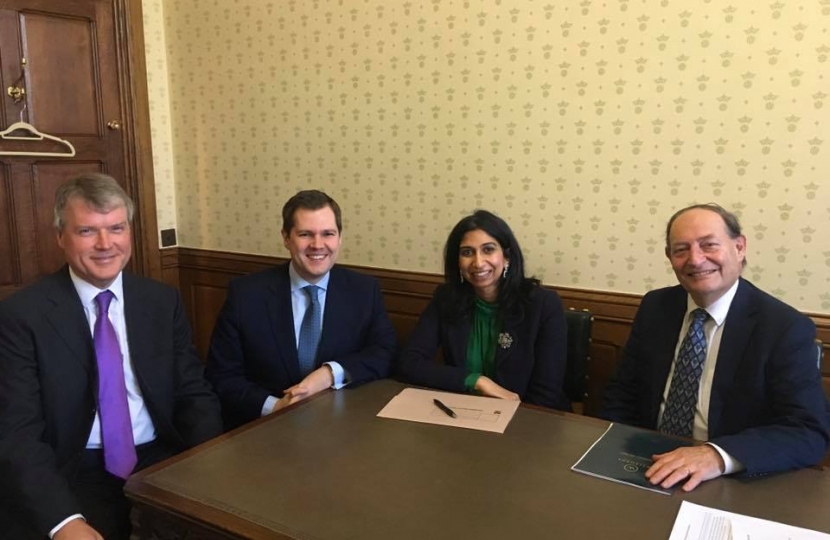 Discussed at the meeting was the presence of nitrates in the Solent region, which has so far prevented a number of planning applications from progressing. This impasse now threatens to place several construction companies out of business whilst at the same time slowing down vital house building. The group discussed the urgency surrounding the need for assurances from Natural England so that a direction for action can be agreed upon.

Suella had already raised the matter in the chamber and has written to Natural England and is currently awaiting their response. Suella outlined the urgency surrounding the need for a resolution, as the Solent area has been plagued by gridlock and inactivity as a result of a lack of action from Natural England. All present at the meeting expressed their frustration at the lack of guidance from Natural England.

Additionally, the group also discussed the status of the plans for Welborne garden village and the implementation of an updated Junction 10 on the M27. Suella outlined the funding gaps, emphasising that increased cooperation between all parties involved will be necessary if the plans are to be implemented. Further to this Suella will meet with Baroness Vere this week to discuss action and the current state of the project.

“It was great to have a roundtable with all the parties involved, we were able to fully understand each other’s priorities and have deliberated on a number of strategies going forward. I have the utmost faith that we will be able to break this nitrates deadlock in the foreseeable future, however we do need urgent action from Natural England to rectify the situation.”

Suella is waiting on a response from Natural England, which will shortly be available upon request from her Westminster office. It is hoped that her interventions at this critical time will do much to facilitate progress in the field of home building around the Solent.