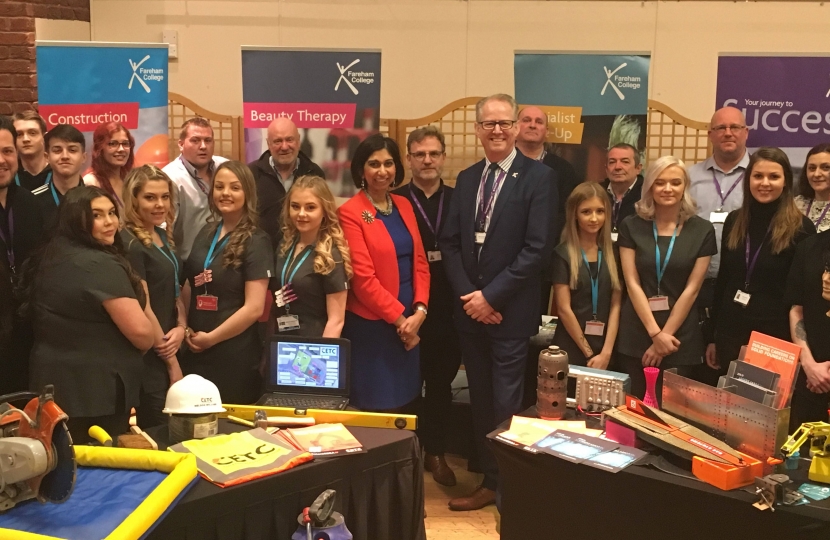 Local MP for Fareham Suella Braverman has welcomed new official figures which show that the total number of people claiming unemployment benefits in the Fareham area has continued to fall.

The latest figures from the Office for National Statistics (ONS) reveal that the amount of local claimants stood at 425 in the year up to December 2018 – down by 55 since December 2017. The new figures point towards a continued trend of economic success for the local economy, as the figure of 425 claimants represents just 0.8% of the economically active population aged 16-64.

The figures come on the back of broader statistics from the Office for National Statistics which reveal that overall UK employment has climbed to a record high, with wages rising at their fastest pace in over a decade.

Suella Braverman, who coordinates the Solent Business Forum for local businesses, welcomed the news as the Office for Budget Responsibility also confirmed that employment is predicted to be higher than expected over the next five years.

“I was very pleased to see the latest unemployment figures for Fareham, where we have a thriving economy that is full of innovation and hard work.”

“It was especially pleasing to hear that the number of claimants aged 18-24 has dropped by over eleven percent in the year to December 2018, which shows that more young people are either in education or in work and earning a wage.”

The Solent Business Forum meets quarterly to provide a dialogue between business, local representatives, policy-makers and key stakeholders. If you are a local employer or enterprise and would like to be part of the next Forum meeting, you can contact Suella Braverman via her website.

I am working hard with local employers, colleges and schools to ensure that our young people have access to high-quality technical and vocational training. I have supported increased funding for apprenticeships, building on the excellent potential at Fareham College and CEMAST, and am pleased that the government is continuing to back this excellent form of training.

Suella has welcomed the measures the Government has put in place to ensure every student across Fareham receives a high-quality remoted education while schools are closed.