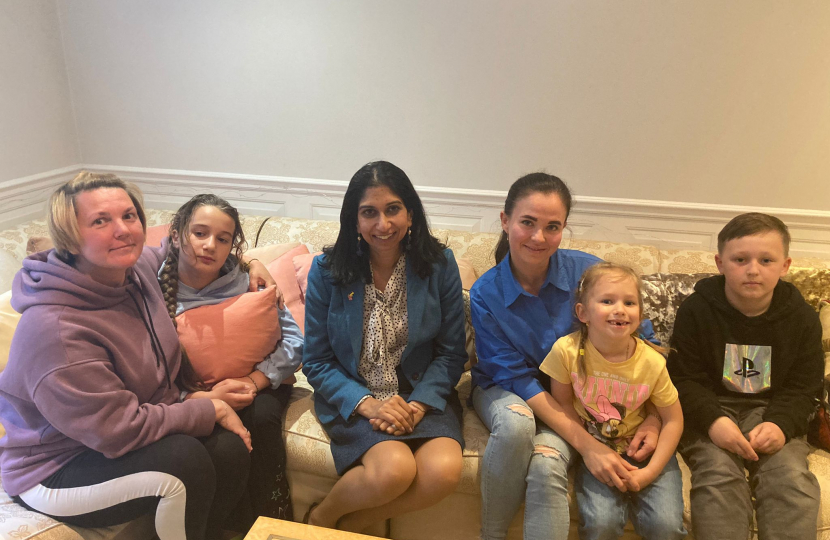 Over the past few months Suella and her office have been working round the clock to support the safe arrival of Ukrainian refugees to Fareham. In close coordination with the Home Office, Suella has been instrumental in supporting both applicants and host families in finding a speedy resolution to applications made via the Government’s Homes for Ukraine scheme.

One such family that Suella has directly supported was the Beresneva family, who Suella met on Friday in their new home in Sarisbury Green. Yuliia (33), her son Danya (10) and her daughter Anya (5) fled the conflict from their home in Kyiv during the opening days of the war. Now, two months after leaving their homes in Kyiv, the family is starting to rebuild their lives living with a host family in Sarisbury Green, with the children having been welcomed with open arms by a local primary school.

Yuliia and her family are among the first of many Ukrainian families arriving in Fareham, with over 1,500 refugees from war-torn Ukraine already safely settled across Hampshire. Suella was deeply moved by an emotional visit to the family embracing Yuliia. Commenting she said:

“You are welcome here; you are part of our family. You will have safety. The whole country wants to do everything it can to support you and to help your children have a future. I am honoured to have been involved in securing the safety of the Beresneva family and I am going to carry on working hard to support existing applications.”

Following on from her recent visit to Ukraine in her capacity as Attorney General, Suella has seen first-hand the brutal effects of the war. The MP for Fareham remains resolutely committed to supporting the Ukrainians in their fight against a foreign aggressor.