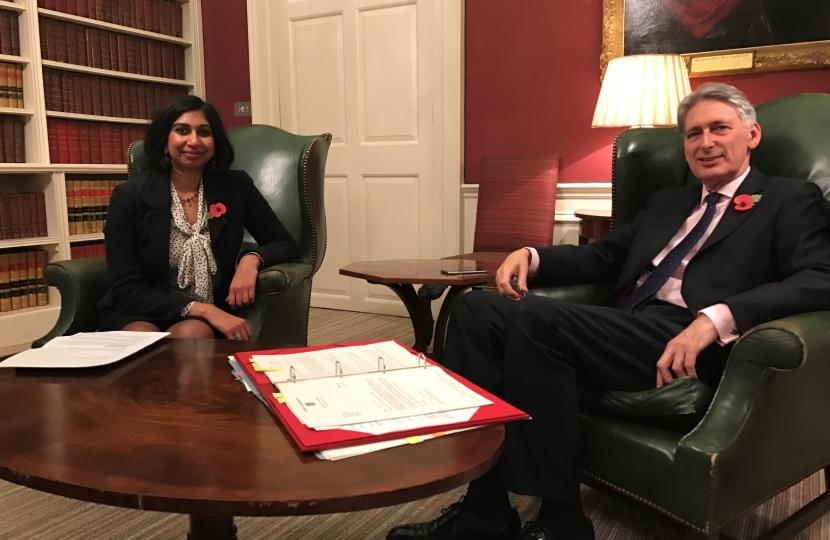 Member of Parliament for Fareham, Suella Braverman, has welcomed latest growth and employment figures announced in today’s Spring Statement and a £10 million transformation bonus for Southampton and Portsmouth.

Providing an update to the House of Commons on the state of the UK economy, Chancellor of the Exchequer Philip Hammond announced that the British economy is expected to grow faster than Germany this year with 600,000 more jobs by 2023 – 4.1 million more people in work compared to 2010  -  and that UK GDP will increase by 1.2 per cent in 2018/19, 1.4 per cent in 2019/20 and 1.6 per cent in the following three years.

Wages will also rise faster than previously expected and above prices to a rate of 3.3 per cent in 2023.

It was also revealed that Southampton and Portsmouth will receive nearly £10 million from the Transforming Cities Fund, with £5.7m and £4m being awarded respectively. The cash boost will be for schemes such as bus station upgrades, new cycle lanes and road improvements.

“Today’s positive growth and employment figures prove that the UK is strong and resilient as it heads towards the conclusion of Brexit, and further dispels the myths that were pedalled by Project Fear before the EU Referendum in 2016.

“Economic growth, wages and employment are continuing to rise while our deficit falls faster than expected, which means the government can start to be bolder in its funding of vital public services.

“It is also fantastic news that Southampton and Portsmouth are to receive a £10 million cash injection for local improvement projects which will benefit all those in Fareham who visit and work in the two cities as well as helping to boost economic growth in the region as a whole.”

The Chancellor confirmed that the 2018/19 deficit will be £3 billion lower than expected, down to 1.1 per cent of GDP from almost 10 per cent under the previous Labour Government, with National Debt being revised down in every year, falling as a share of GDP in every year from 82.2 per cent next year to 73 per cent in 2023-24.