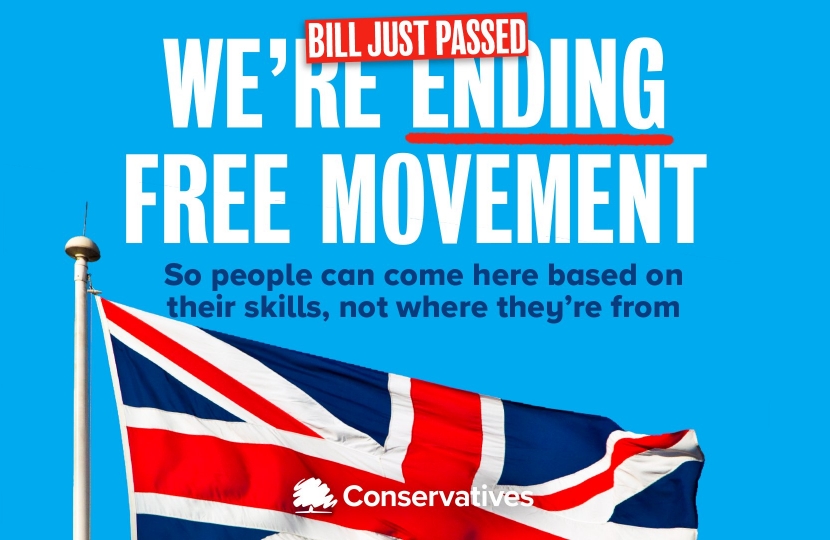 When people voted to leave the EU, they did so in the knowledge that the free movement system imposed by the EU would end. The Home Secretary has been clear that she has a responsibility to take back control and bring an end to free movement once and for all. To do this, the Government introduced the Immigration and Social Security Coordination (EU Withdrawal) Bill in the House of Commons, which has recently passed. This Bill will end free movement and provide the Government full control of our borders for the first time in many decades.

This is a short, Brexit-related Bill. Its primary purpose is to:

• The Bill does not establish the new points-based system for immigration, which is due to come into effect in January 2021 and will apply equally to EU and non-EU nationals. That will be introduced through changes to the Immigration Rules.

Although not included in the Bill itself, the Bill sets the stage for a new points based immigration system. The Home Office has now released a policy statement outlining that it will replace free movement with the UK’s very own points-based system. This new system will prioritise those with the highest skills and greatest talents, including scientists, engineers, academics and innovators.

“I have always believed that the new system is more than simply controlling immigration. I am glad that the Government has committed to reducing the overall levels of migration while ensuring we attract the best and brightest from across the world. This process is also about the creation of a high wage, high skill, high productivity economy. This ambition explains why the Government will not be introducing a general low skilled or temporary work route. I welcome this approach as the UK needs to move away from relying on cheap labour from Europe and focus instead on investment in technology and automation.”

11,698 New Laptops and Tablets for Disadvantaged Students Across Hampshire