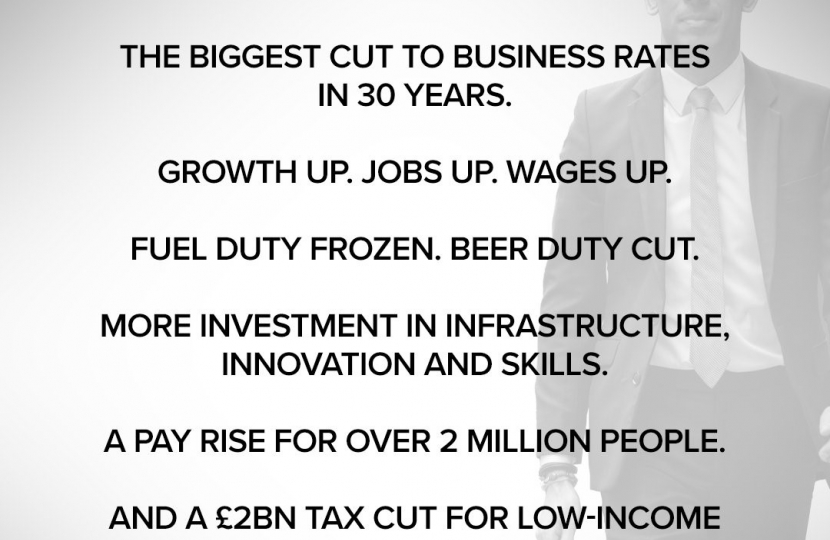 Yesterday we witnessed the Conservative Government’s Autumn Budget and Spending Review. This was a comprehensive budget that will help working families meet the cost of living, support businesses’ recovery, deliver world-class public services, and drive economic growth across the country. It is a budget that will aid the people of Fareham in their recovery from the pandemic.

We have been able to deliver such a revolutionary budget, as thanks to our economic plan, our recovery will be quicker than expected. The OBR now expects the economy to return to pre-pandemic levels by January, earlier than previously expected. Similarly, the long-term damage to the economy is expected to be 2 per cent rather than 3 per cent. This has allowed us to introduce several measures to help working families, public services, and businesses. The economy is growing, and debt is falling. This budget puts us on track for economic recovery and prosperity.

This Conservative Government is resolute in its commitment to vulnerable households and this budget will aid families with the cost of living. The budget has introduced a significant tax cut for low-income families by reducing the Universal Credit taper rate from 63 per cent to 55 per cent, a 6.6 per cent increase in the National Living Wage to £9.50 an hour, giving a £1,000 pay rise to 2 million of the lowest paid and lifting pay restraints for public sector workers. Furthermore, we have introduced a freeze in fuel duty for the twelfth consecutive year, and a freeze in alcohol duty, alongside radical reform that will allow people in Fareham access to a simpler, fairer and healthier system.

I know that businesses in Fareham have expressed concern over businesses rates and I am therefore pleased that businesses will also benefit from new measures, including a 50 per cent cut in business rates next year for 90 per cent of retail, hospitality and leisure, alongside a freeze of all rates, the creation of new business rates relief to encourage green technologies and improvements to properties, and a doubling of creative industries tax reliefs for the UK’s world-leading theatres, orchestras, museums and galleries.

Other measures to drive economic growth include record investment in our roads, railways and broadband; supporting innovation through a record £20 billion spending on R&D; and a huge uplift in skills training through T-levels, Institutes of Technology, and apprenticeships.

Finally, we are also introducing a new Draught Relief which will apply a new, lower rate of duty on draught beer and cider, cutting duty by 5 per cent, the biggest cut to cider duty since 1923 and the biggest cut to beer duty for 50 years. This will mean that you will be paying less pounds for your pint. I am proud to be part of a Government that has delivered on its promises so comprehensively and that has provided a robust budget for the whole of the United Kingdom from Fareham to Falkirk.