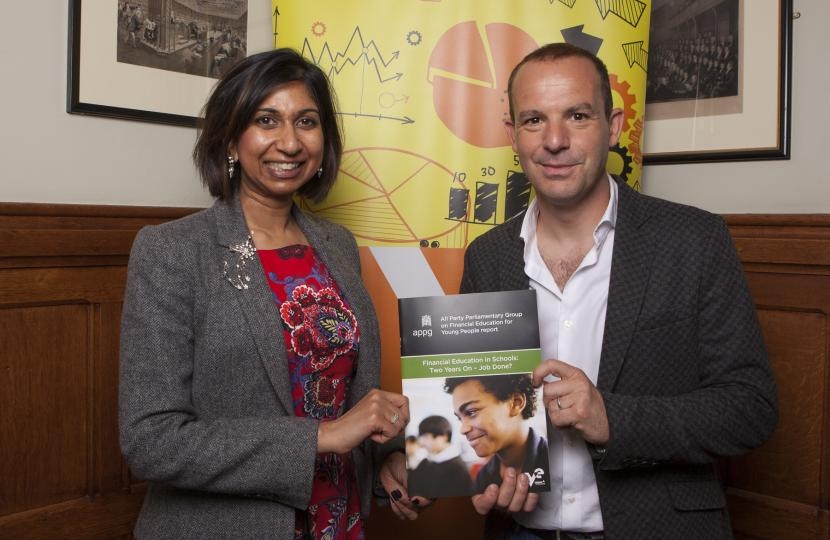 Good afternoon, and may I first of all thank everyone at Young Enterprise for organising today’s event, and inviting me to say a few words about the work we’ve been doing with the All-Party Parliamentary Group. Young Enterprise are doing invaluable work in getting financial education further up on the Government’s agenda.

Financial education needs to start early on. Attitudes to spending, saving and wealth creation are formed in childhood. By the age of seven, most people will have their personal "financial culture".  There are also so many more opportunities to spend money and more financial decisions to make than previous generations. Some children grow up today without having any awareness of coins, paper notes or cheques, as there has been a shift towards an increasingly cashless society.

First, I should give a bit of background to the APPG itself, and the work we have been doing:

The APPG on Financial Education for Young People was formed in 2011, and is the leading voice on financial education issues in Parliament. It has over 200 parliamentary members and a wide range of supporting organisations. A few months ago I was given the pleasure of becoming the chair of the APPG, succeeding my friend Mark Garnier MP, who did a great deal to raise the profile of this issue.

In the 2010-15 Parliament the APPG launched three investigations, looking at financial education in schools, further education, and for vulnerable young people.  The reports produced through these investigations were highly influential, with the first in 2011 playing a key role in getting statutory financial education introduced at secondary level in England as part of Maths and Citizenship lessons. That was a significant move forward in ensuring that young people are prepared to manage their money well and for the many financial challenges in later life.

However, many of the changes in the way money is handled – from the rise of contactless payments to the growth of in-app purchases – have occurred in the past few years alone. In short, much has changed since the publication of that report five years ago. There have also been concerns about financial education provisions in schools. That’s why the APPG decided to revisit the issue of financial education in primary and secondary schools.

I was delighted to lead a six month cross-party inquiry in Parliament, supported by Young Enterprise, to look at how effective financial education currently is in schools, in particular in England following the introduction of statutory status at secondary level in 2014. There was no shortage of opinions on this issue. We took oral evidence, as well as over 40 written submissions – we heard evidence from a wide range of organisations from across a number of sectors, including some on this very panel and in the audience.

The findings of the inquiry were worrying: up to 70% of students still leave formal education without having ever received a lesson on personal finance. Our young people are growing up more financially illiterate yet more exposed to opportunities to use money.

Our report was published in May and found that, despite many examples of good practice across the country (including in your own schools), there is still much to do to ensure all young people receive quality financial education. This includes strengthening its position in the secondary curriculum where it exists, and extending statutory provision to primary level so that young people develop positive attitudes towards managing money from an early age.

So the UK still faces a significant financial capability challenge. Young people face an increasing complex world with far greater opportunities to spend money, and more decisions to make. Young people also face a number of high stakes financial decisions as they make the transition to adulthood – not least in terms of their educational or employment route after school, including, for example, whether to attend university and pay tuition fees or to pursue full time employment or an apprenticeship.

Yet there is much evidence to show that many young people are struggling to navigate this new financial landscape. Those aged between 18-24 represent over 20% of the over indebted population – a third of young adults find themselves in this situation. The lack of an effective programme of financial education is also reflected across the wider adult population - where over 21 million families have less than £500 in savings to cover unexpected bills.

In the report, we also recommended that many of the key aspects that characterise the Centres of Excellence programme – from having a ‘lead teacher’ on financial education to adopting a whole-school approach – should be encouraged in other schools by Government.

With the report now published, I’ve been taking it to the highest level in Government and raising the importance of financial education in the House of Commons. In the weeks ahead I’ll be continuing to meet with Government Ministers to discuss the report’s recommendations and seek commitments to implementing its proposals for strengthening financial education.

We’ve come a long way over the past year – with financial education now firmly on the political agenda – and with the support of my parliamentary colleagues we will continue to push for policy change that will help ensure that all young people across the country benefit from the high quality financial education that everyone in this room is committed to providing.