On the Beat with Fareham Police 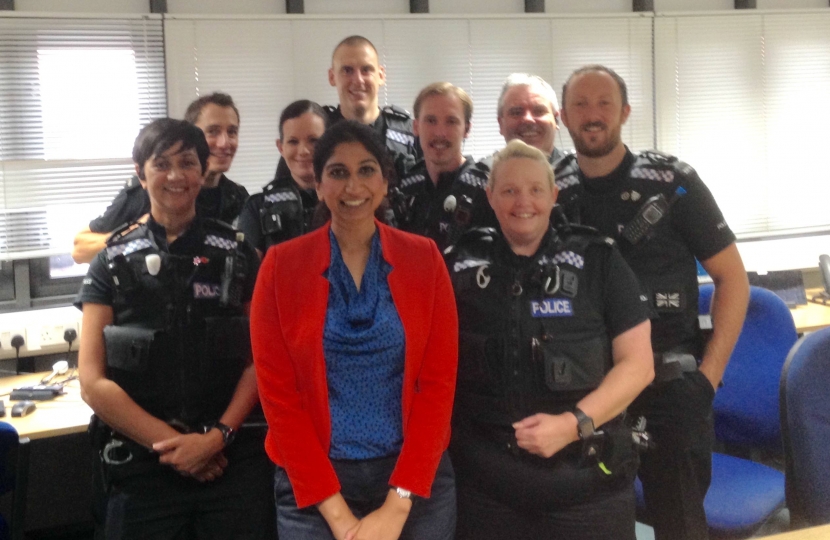 I was lucky enough to get an insider's view of our local Police Force in Fareham. Our day started with the early morning Briefing with the Neighbourhood Prevention Team, covering the previous night's vehicle thefts in Funtley and consequent arrests of 5 men earlier that morning. I then met with Chief Constable Andy Marsh and Chief Inspector Jim Peglar who set out how both the County and District are working on local priorities, ie anti-social behaviour, vehicle-related theft and burglaries, through the use of PCSOs, whilst making use of better IT and consolidation of resources.

I then went on patrol with a Police Constable Mangan who took me on various follow-up meetings with people who had made some non-urgent 101 calls. On our travels we came across a road traffic accident on Gosport Road to which PC Mangan attended. I also visited Two Saints Hostel at 101 Gosport Road, an invaluable hostel for the homeless helping them to turn their lives around. I also learnt a lot from the Response and Patrol Team, working 24hours a day around Fareham and keeping an eye open for problems.

A significant feature of the cases encountered by the local police was substance misuse, whether it be alcohol, drugs or legal highs. I am concerned about the use and effect of legal highs in Fareham and am aware of local headshops supplying them in the area. Young people who take these substances are taking exceptional risks with their health and those who profit from their sale have a complete disregard for the potential consequences. Britain has the highest rate of consumption of legal highs in Europe - 670,000 15 to 24-year-olds, according to the UN Office on Drugs and Crime. This appetite remains undiminished by the risks: in 2013, there were 173 deaths from legal highs in England, Wales and Scotland a figure that rose from 99 the previous year

Drug and alcohol treatment charity Addaction says the drugs are often marketed to young people through brightly-coloured packaging but are also becoming the "drug of choice" for other users because they are easy to buy. They are not covered by the Misuse of Drugs Act 1971 because drugs are classified as illegal by their chemical compounds. However, possessing or supplying a legal high is an offence if it contains a banned drug. Drug-driving, including after using a legal high, is illegal.

One of the problems with legal highs is that existing legislation only allows substances to be banned one by one and each time the Government bans a legal high, as recently happened with 4-Methylmethylphenidate and Ethylnaphthidate – the chemical laboratories where the drugs are produced simply tweak a compound to render them effectively legal again. More than 500 so-called legal highs have been banned in Britain since 2010, yet are soon replaced online and on the shop shelves. Last year, a record 101 new strains were detected by the EU drug monitoring agency.

The government has already taken a range of action against so-called 'legal highs', including banning more than 500 new drugs and creating the Forensic Early Warning System to detect substances not seen before in the UK. There is also ongoing work to enhance the response to prevention, treatment and information sharing.

During the Queen’s speech in May the Home Secretary announced that it will introduce a blanket ban on the production, distribution, sale and supply of all legal highs. Dealers could face up to seven years in prison. Laughing gas, or nitrous oxide, will also be prohibited. By targeting the suppliers, the Psychoactive Substances Bill will ensure that people have less opportunity to get them. It will also give powers to the police to seize and destroy 'legal highs'. The landmark bill will fundamentally change the way we tackle new psychoactive substances - and put an end to the game of cat and mouse in which new drugs appear on the market more quickly than government can identify and ban them.

I am reassured that the Government is determined to protect people and our communities from the harm that drugs cause - whether they are illegal substances or 'legal highs'.

I had a fascinating time with the Fareham Police team and felt grateful for their service, professionalism and expertise. If you would like to go on patrol with the team, contact Hampshire Constabulary on http://www.hampshire.police.uk/internet/news-and-appeals/2015/august/18…