Calling on the Chancellor to fund M27 and Stubbington Bypass 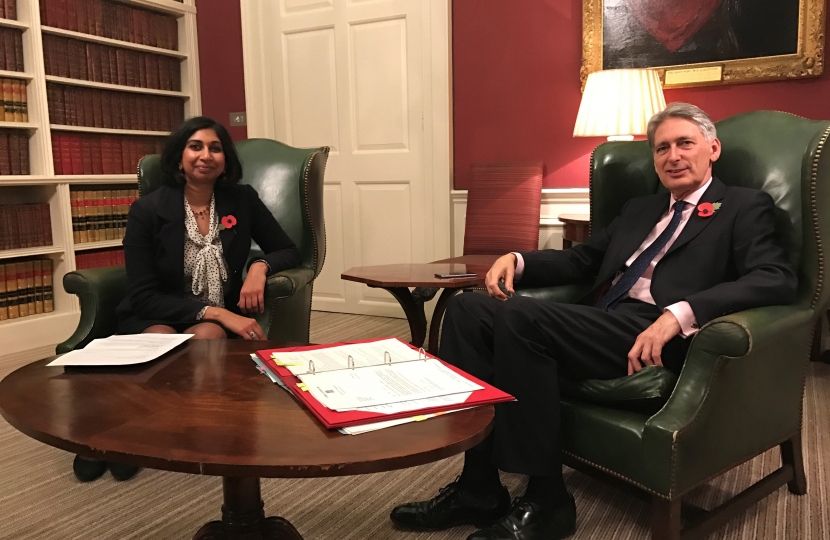 Chronic congestion causes delays to thousands of commuters on the M27, which is Hampshire’s busiest motorway. At junction 9 works are urgently, needed including lane widening and new access roads, but there is a shortfall of £7 million. With a new housing development set to bring 3500 homes to the area, now is the time to invest properly in improving this stretch of motorway.

I discussed the need for upgrades to junction 10. There are plans to make junction 10 an all-moves junction as currently traffic can only leave the motorway on the westbound side and join in the eastbound direction. Whilst £15 million has been promised from Highways England, a further £20 million is needed for works to begin.

Junction 11 at Fareham has regular reports of heavy congestion. With 6000 new homes to be built at Welborne current pressures are only going to get worse – which means longer delays for commuters.  There are plans to upgrade the M27 between junctions 4-11 to a smart motorway, which would ease traffic. I will continue to make the case to ensure funding is secured so these works can go ahead as soon as possible.

I urged the Chancellor to commit full funding for these improvements in the Autumn Statement. These works are vital for the Solent area – they will alleviate congestion, shorten journey times and boost productivity.

I also urged the Chancellor to support the proposed Stubbington Bypass with funding from central government. The Stubbington Bypass is a new proposed road that will connect the A27 in the north of Fareham to Peel Common Roundabout in Gosport. The £34 million project will allow traffic to bypass Stubbington, meaning journey times and congestion will be significantly reduced. The Bypass will connect Titchfield Road to Gosport Road and include improvements to the northern and southern ends of the B334.

Planning permission was granted in October 2015 and Hampshire County Council have agreed to fund £8.5 million towards the scheme, meeting the 25% local match funding required for the scheme to be considered for central Government funding.

The bypass will significantly reduce congestion around Fareham and Gosport – both Caroline Dineage and I have been meeting with ministers to get the bypass high up on the Government’s list of priorities for infrastructure funding. With Hampshire County Council meeting the 25% local match funding the ball is now in the Government’s court to ensure this goes ahead.

Improving local infrastructure and transport, along with local planning issues across Fareham, are important priorities for me. We need to keep investing in proper travel connections and the services to support people in their work and leisure time.M27