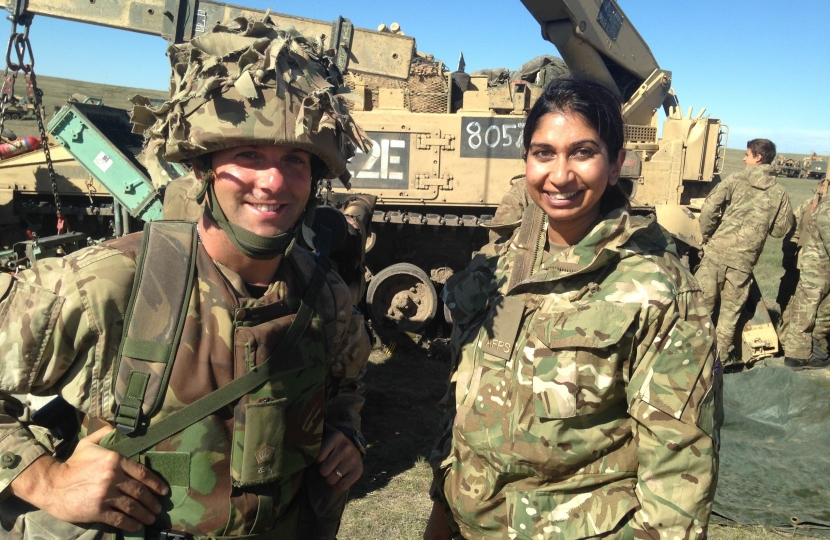 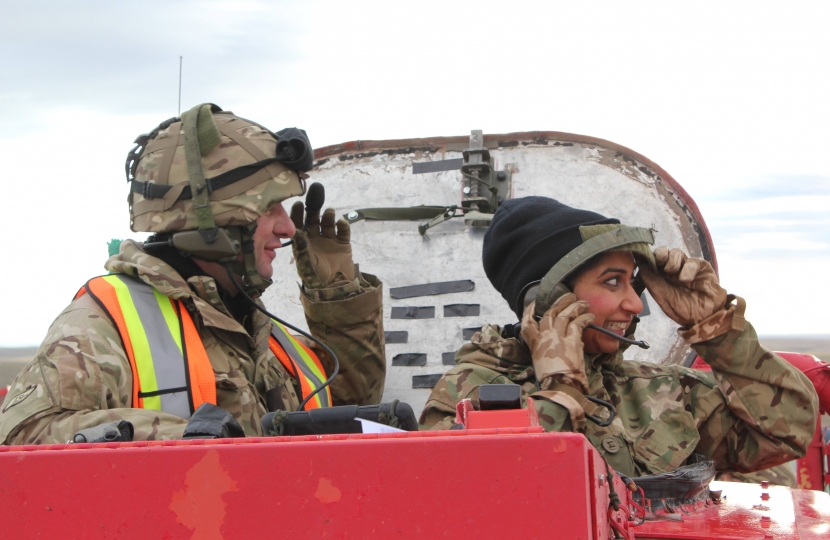 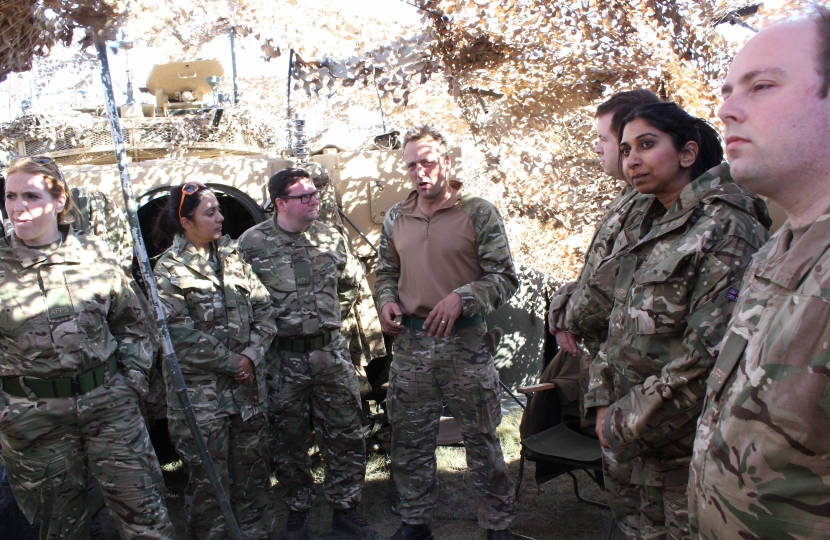 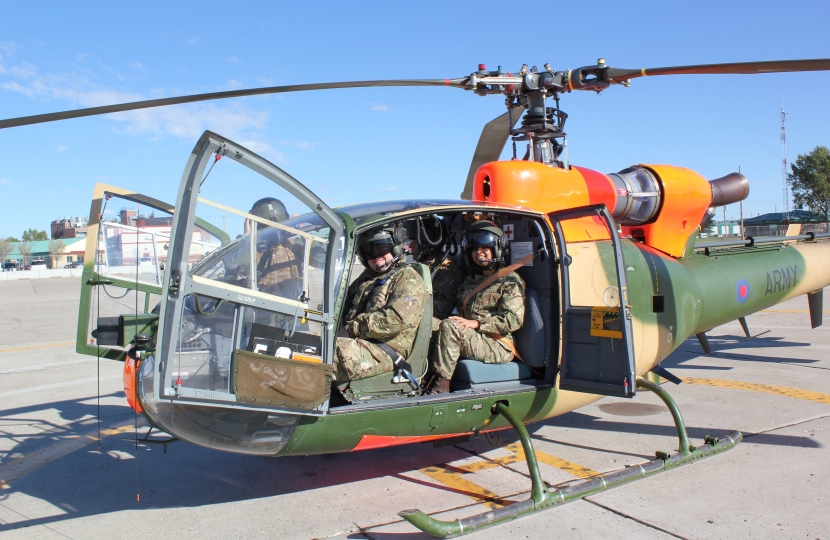 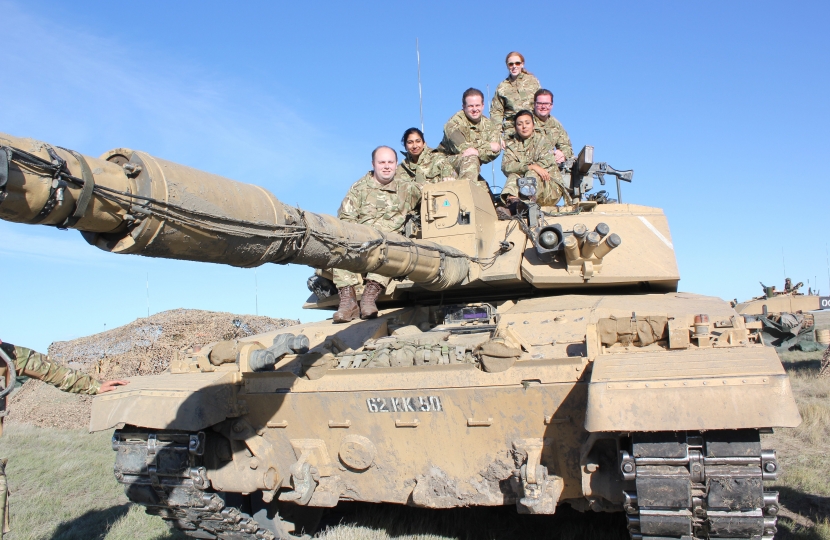 With the Armed Forces playing such a large part in the lives of many local residents, I was keen to see for myself the training our service personnel undergo.  It was therefore an honour to visit the British Army Training Unit Suffield (BATUS) in Calgary as part of my participation in the Armed Forces Parliamentary Scheme. I was particularly pleased to meet my constituent training out there, Major Iain Wallace, of the Royal Electrical and Mechanical Engineers.

The prairie of Alberta has provided an excellent opportunity for the British Army to train on a large scale since 1972 and BATUS is an organisation situated on one of the most sparsely populated areas of the Alberta plain. It is equipped with in excess of 1000 vehicles including a full complement of Challenger 2 tanks and Warrior Infantry Fighting Vehicles and each year a Regiment is sent there for six months to take the part of the 'enemy' for the other Regiments that are there to train each year.

The training area at BATUS is equivalent in size to the combined area all of the main training areas used by British Army in the UK and in Europe; Salisbury Plain Training Area would fit in 7 times over. 5 Battlegroups, each containing approx 1400 soldiers, are trained at BATUS each year. These Medicine Man exercises, which can be up to 30 days in duration, are split into two phases; Live Fire and Tactical Effects Simulation (TESEX), the latter with a live enemy. The TESEX system identifies when vehicles have been fired at and damaged / destroyed and also informs soldiers when they are being fired at and if hit what injuries they have sustained.

The duration of the exercises, and size of the training area, allow all elements of a combined arms battle group (Infantry, Armour, Artillery, Engineers, Air Defence, Logistics and Equipment Support) to conduct realistic live firing training at all levels and to practice sustaining this activity over a long period of time.

My trip involved meeting with soldiers from all ranks of the British Army, including those from the Royal Tank Regiment, Tactical Operations, Commanding Flight Officers, Royal Signals, Royal Electrical and Mechanical Engineers and the light Infantry, as well as observing a number of training exercises and taking a flight in a Gazelle helicopter over the base during a simulated battleground attack.

I was delighted to meet Fareham-based Major Iain Wallace of the Royal Electrical and Mechanical Engineers who gave an in-depth presentation of the work of the Combat Support Battallion. He emphasised the importance of equipment, as well as the quality of training and leadership to deal with the complexity of land battle.

Our Armed Forces are admired and respected around the world, and rightly so. I believe firmly that the first duty of Government is to make sure that its citizens are safe and that our interests are secure. As such, it is vital that we invest in strong defences.

The Government's reforms mean that the Army is transforming into a smaller, but more modern, integrated and adaptable force, better able to respond to changing threats around the world. The Government is also boosting the Reserves, delivering the latest equipment and investing in new capabilities to combat the security challenges of the future.

With the biggest Defence budget in Europe and the second largest in NATO, our armed forces will remain well trained, well equipped and - crucially - well funded. Our Armed Forces will continue to be the bedrock of our society and provide extremely rewarding and exciting careers for future recruits. However, only by sticking to our plan will we be able to secure Britain's future, maintain our world-class military capabilities and honour our international commitments.

Our commitment to spend 2% of GDP on Defence is a sign of how seriously we care about our armed forces and the work they do. Chancellor George Osborne announced that defence would receive annual real-terms increases in its budget of 0.5 per cent a year, to around £38.9 billion by 2020/21. For the first time since 2010, the MOD has become a ‘protected’ department, with its budget fixed in advance of the Spending Review. As a result, this year’s SDSR should be able to avoid the severe capability reductions that were the main feature of the last Review in 2010.

My trip came as work on the 2015 National Security Strategy and Strategic Defence and Security Review gets underway.  The government is seeking comments and feedback from the public to feed into the reviews, with a deadline for responses of 23rd October.  The online questionnaire can be found at: https://www.gov.uk/government/news/strategic-defence-and-security-review-public-engagement. I know local people will have strong feelings about how we modernise and strengthen our Armed Forces, and I would urge them to take part in this consultation.’