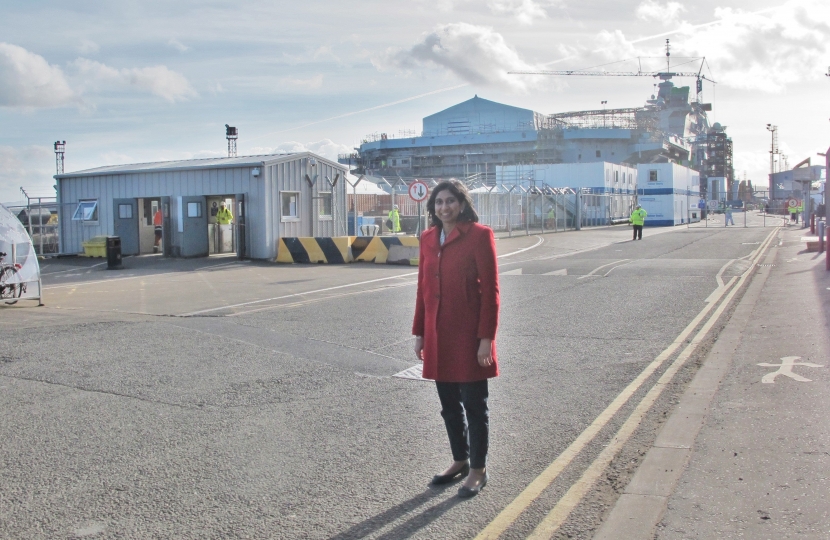 I was welcomed on board the nation’s future Queen Elizabeth Class aircraft carrier HMS Prince of Wales, currently being built in Rosyth dockyard.

Looking around the aircraft carrier, I met the men and women of the Royal Navy who will be responsible for operating the vessel from their future base port of Portsmouth Naval Base. I was also  given an in-depth tour of the ship’s facilities, weapons stations and flight-deck.

After the tour, I received an information briefing from senior personnel aboard the £6.2 billion vessel, learning of the aircraft carrier’s capability, which when operational will be able to carry 36 aircraft and 43 helicopters, along with 700 crew and 1,600 air-staff.

With this great asset,  the Royal Navy will be capable of having a continuous presence at sea with at least one carrier operational and deployed at any one time.

HMS Prince of Wales is due to be delivered in 2019, with HMS Queen Elizabeth due to be completed this year. The new carriers are three times the size of the Royal Navy’s retired carrier HMS Illustrious, and are larger than both the French and Russia aircraft carriers.

I am very grateful to the Royal Navy personnel for giving me the opportunity to spend time learning about our new magnificent aircraft carriers. I was really struck by the scale of these ships.

Both ships will create thousands of jobs across the country, including in the Solent area, where the HMS Prince of Wales will be based.

HMS Prince of Wales and HMS Queen Elizabeth will spearhead Britain’s sea power for at least the next 50 years, keeping our nation safe at home and protecting our interests abroad. They are just a part of our investment in a growing, cutting edge Royal Navy.